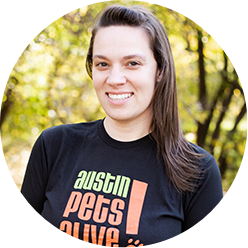 Stephanie joined Austin Pets Alive! in late 2018 as the director of Shelter Lifesaving Operations. With a professional background in the hospitality industry, Stephanie discovered her passion for animal welfare over ten years ago when she began volunteering in her hometown’s animal shelter. Since then, her experience has ranged from shelter behavior and medical work, to managing a rural sanctuary for former laboratory animals, to serving as shelter manager at Wyoming’s largest open admission shelter and adoption center. In 2017, she completed the Humane Network’s Animal Shelter Management program at the University of the Pacific, which helped solidify her belief that her efforts belonged in the No Kill movement. Now overseeing the lifesaving animal programs at APA!, Stephanie is responsible for many of the people and processes that ensure the community’s most at-risk animals are properly cared for and given a chance at a bright future. Stephanie currently lives in South Austin with her former laboratory dog, Eli, and her rescue cat, Rebel.