Austin Pets Alive! kitten caretakers have been in the throes of organizing, stocking up, and preparing for kitten season which typically kicks off in full force around mid-March. Last year this Neonatal Kitten Program rescued 1,032 kittens, including mom cats with newborns, into the Nursery with round the clock volunteers providing the critical care they need. That is a significant contribution to the No-Kill efforts in Austin for 2011. A calendar featuring babies from last year is available online with all proceeds directly benefiting the Neonatal Ward. 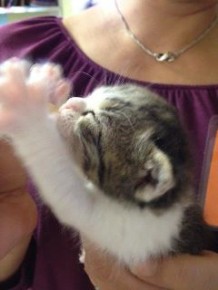 APA! also rescues many pregnant mom cats, getting them quickly into foster homes in an attempt to keep them stress-free and healthy so they can deliver healthy babies. In fact, in 2011, there were 124 baby kittens born in APA! foster homes! If mom cats are healthy with healthy kittens, and have small litters, APA! will place orphaned babies with them to get the nurturing, socialization and colostrum that only a mom cat can provide. In just the past few days, we have rescued Bella a pregnant mom who we expect to deliver in the next week or so, and 3 orphaned babies.

Since its inception, the growth of the Neonatal Kitten Program has been substantial. In 2009, baby kittens were rescued only as foster homes were available. In September of that year, thanks to the donation of a vintage Spartanette trailer, the program had a home. A year later the nursery moved to the facility on Manchaca, and with added space and closer proximity to the APA! Medical Clinic, the program saved 801 kittens. For 2012, the goal is simply to continue rescuing every single neonate and pregnant mom cat that end up at Austin Animal Center. With a mild, somewhat wet winter, we expect to far exceed the 1,032 lives from last year. 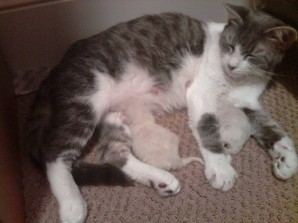 APA! is also sharing lessons, protocols, and infrastructure planning with other area shelters and anyone who attends the upcoming AmPA No Kill Conference that begins on February 25th. The goal is to teach other shelters and rescue organizations how to create and sustain their own Neonatal Ward.

In just a few weeks, the nursery will be relocated to the Town Lake Animal Center (TLAC) facility located at 1156 W. Cesar Chavez. We are in need of many supplies, and are having a donation drive all through February! Donations can be dropped off at TLAC. Specific items include::


To make a financial donation visit:  http://www.razoo.com/story/Bottle-Baby-Program. We are excited to see what 2012 brings, and any and all donations will help us!