A "grueling" week with Maggie and the dirty dozen

It has been a while since we have posted because we have been busy!  But there's lots to update, so this will be a long post.  Last Sunday was a true dog day of summer.  A great morning at an APA adoption day at Jo's where we both adopted out a dog!  Then we rushed home to start the pups on gruel (softened canned puppy food and water).  Every other litter we have fostered has needed a while to get into the idea of lapping and using their teeth.  Not these guys.  Even the runt, Tinkerbell, charged in face first and they all ate like they had been waiting for us to bring out the good stuff.  Mom doesn't seem offended at their new found love of gruel, in fact she would really be happy if we would just take it from here.  But we want everyone healthy - so mom is continuing to feed.  She is also acting as an accomplice to the breakouts of the puppy pit.  Several times we have found pups waiting for us in the AM and we now know that they climb up on mom's back while she is nursing the others and go over the wall.  We have a matter or days until the puppy pit is a thing of the past and we'll need a whole new containment system.

We also started potty training last weekend.  We have created an entirely different kind of puppy pit in the side yard and we run them out there constantly.  It is exhausting!  For a few days we used a laundry basket to help limit the number of trips it took to get all 12 out.  But they are already outgrowing the basket.  The good news is they are doing pretty well with it and on several occasions one of them has scratched to be let out of the pit to go right out and potty.  I won't mention all the times they just poop in the pit and then dance around in it.  I have been buying baby wipes in bulk.

And we finalized Grace's adoption last Sunday, too.  It was a big day for everyone.  She is doing great in her new home and she is a very lucky dog with a great mom.  Her new brother the cat seems to be coming around also.

So the week was filled with puppy food and the results of feeding puppy food to 12 puppies.  That kept us pretty swamped.  Then Friday while everyone was outside in the puppy poop pit for their morning constitutional - something happened to Cricket - one of the Golden pups.  She was fine one minute and then laying on the ground doing a quiet whimper the next.  She never cried out, and since she is always talking, that was odd.  She wouldn't use her right leg at all.  After a call to Ellen for a phone consultation, we took her to the great folks at Lake Austin Blvd. Animal Hospital to have them take a look at that leg.  The good news is that it isn't broken.  In fact, other than swelling, there isn't anything obviously wrong with it.  So we started her on antibiotics and we are keeping her as calm as possible and away from the rest of the dirty dozen.  She refused the use the leg all day, but had a good appetite and slept a lot.  We broke our "no dogs upstairs" rule last night (I'm allergic to dogs!) and let Cricket stay in our room.  She woke up about 2AM needing to potty and not feeling very good.  But after a while of cuddling, she settled right back down.  Then this morning she started using the leg again!  She is still limping, but feeling so much better.  Now she is back to her chirpy self and letting us know that she is unhappy with her private suite and ready to be back with her siblings.

So, it is time for another trip to the potty for the dirty dozen.  But as soon as we get a breather among all the trips to the potty and the feedings, we'll keep you updated!

[caption id="attachment_427" align="alignnone" width="300" caption="This is Cricket - ready for her close up. Tinkerbell"] 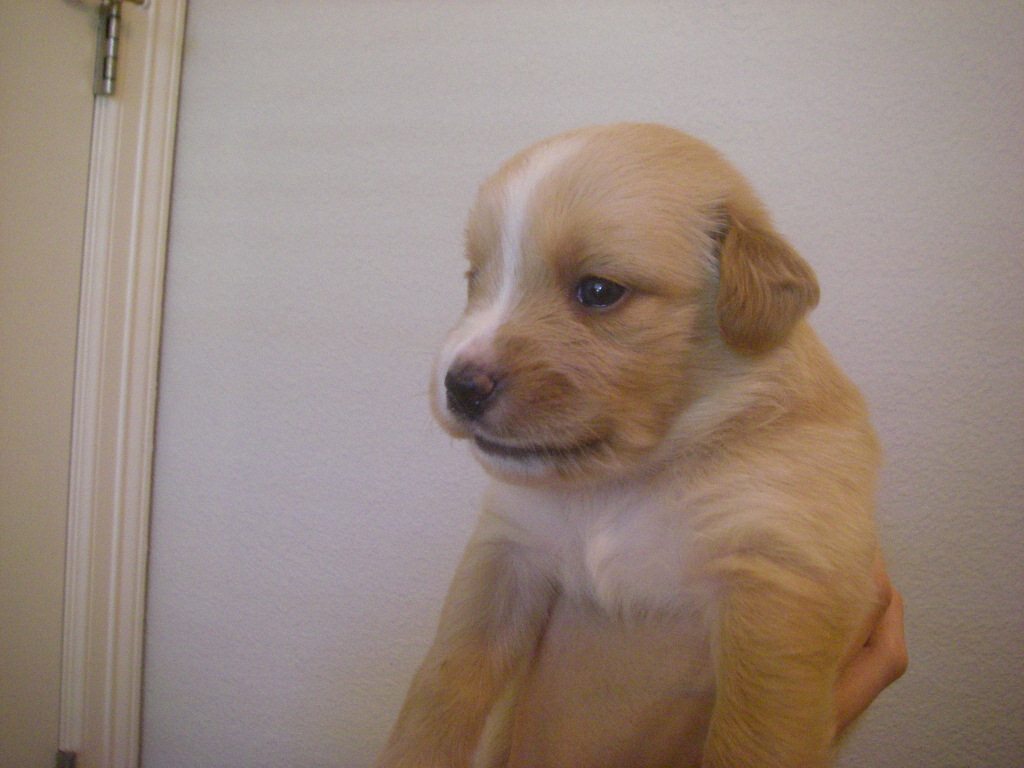