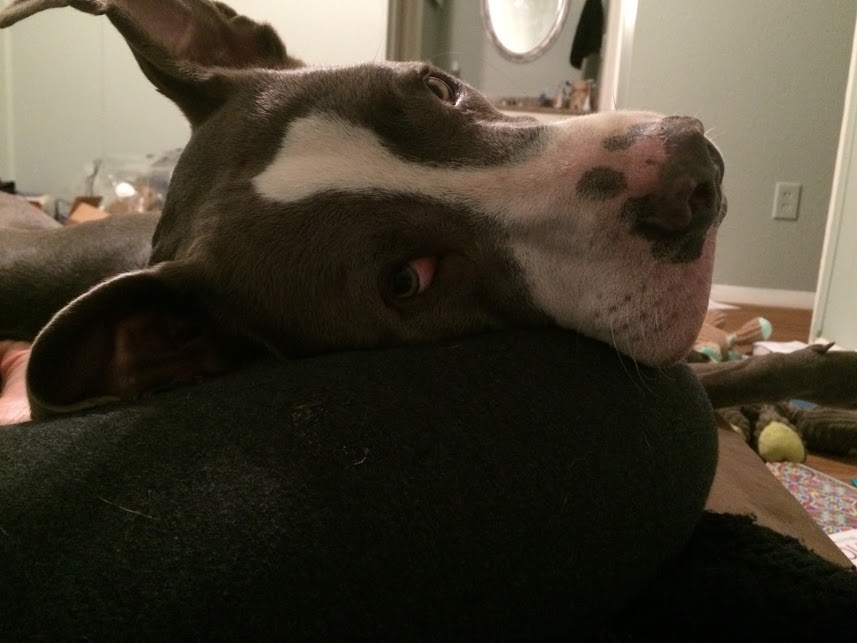 Look at this face? What do you see? A total love muffin? A big goofy dude with lots of
manners? A life saver? Well, you'd be right on all of the above!

Ackley is 2 year old pit bull terrier mix with lots of love to give. He's a sensitive soul, er... sensitive PAWS that prevent him from being in a regular kennel. Instead, he stretches his legs out in a larger pen. And sometimes he barks. But just ignore that part since it's pretty noisy in the shelter anyway. 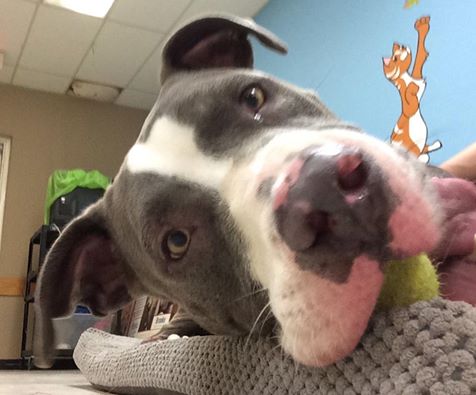 Now the love muffin part-he will happily snuggle up with you on the couch or in bed. He loves nothing more than belly rubs but brace yourself because his full body leans might knock you over. He's a big fan of people of all shapes and sizes, especially if they have treats!

This goofy dude will have you rolling with laughter. Recently on a sleepover, he entertained himself by running back in forth from the couch to the bed and pouncing every time. And he'll happily play with toys for hours. This silly guy even stuck his head in the shower to drink the water as it came out of the shower head! He loves to run and swim and get his sillies out, then will happily settle down for a nap. He's also working hard on all the basics. It's a pretty quick learning curve since he likes treats so much! 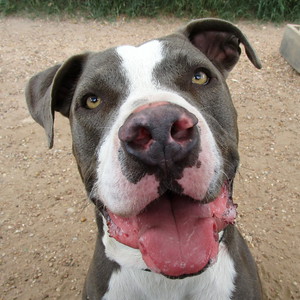 Get to the best part, you say? The life saving part? Time and time again, Ackley has come to the rescue of very sick pups that needed a blood transfusion to survive. You would think that the clinic and the needles and everything would be scary for a dog, but Ackley is an absolute pro. He even gives kisses to the veterinary technicians as they put him to sleep to draw the blood. Most recently, Ackely donated blood to post parvo puppy Richard Dreyfuss after the pup had to undergo surgery when his intestines telescoped onto itself. Not to mention his generous donation to Tipsy who underwent heart surgery early this year. That's SIX times Ackley saved a life. How's that for a shelter dog?!

Now it's Ackley's turn to have a great life! Ackley is more than ready for a home-don't you want a hero to brag about?!