What does it mean for Austin to be a No-Kill city? It means a miracle like this can happen...

My name is Cassandra and I’m the Matchmaker at Austin Pets Alive!. This weekend has been the best of my life.

A man and woman came into our shelter looking to adopt on Friday.  The first thing they said was, “We are huge fans of pit bulls and need a new family member," or something along those lines. They began to tell me and two of my coworkers of their past two dogs, one being a pittie, who both had passed away.

They told us of their dogs' lifestyle and funny quirks, everything. I immediately had Louise’s name popping up in my head, but I held back to see if these guys were the real deal. Louise has been at our rescue since November, 2011.

I sat the family down with me and they pulled out a list of about 17 dogs, all of which being male “bully breeds.” So we went through and I gave them my personal experiences with every dog, along with each of their backgrounds.

The list began to shorten a bit. I started to make light conversation, listening about their past dogs, what experiences they’ve had, their current lifestyle. The more I heard from them, the more I loved them. I told them, “Okay, I’m going to make a whole new list for you guys. All of these dogs are going to be the ones I highly recommend for you. Ready?”

The woman was already tearing up a bit, since she had just been talking about her most recent dogs that passed. She laughed and said, “We plan on being here all day until we find someone.” I looked at her and reassured her, “I’m going to find you guys someone amazing.”

I had them sit in a pen and I brought in dogs one-by-one. I had my all-star team out for them: Ice, Romeo, Al Pacino, Scarlett, all my dogs that needed homes the most. And I brought my big, fat Hippo Louise. They fell in love.

After showing them a good 15 or so dogs it was down to Henrietta, Blue, and Louise.

They were having trouble to decide so I told them we would go into the Life Room, where they would be away from all the loudness of the shelter and get to truly be one-on-one by themselves. They crossed Henrietta out, so it was down to my girl and Blue.

I brought in Blue before Louise, and left them alone to hang with him. I went to pull Mike Kaviani, our Behavior Team Manager, aside to talk to him about these amazing people. When they were done hanging out 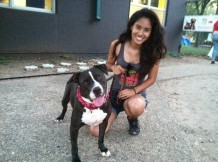 with Blue they were almost set on him. But then I brought my girl in.

I had Mike come in and talk to them and get to know them. After about 45 minutes of conversation and feeling like I’m going to pee my pants with anticipation, the wife looked at her husband and said, “This is your girl isn’t it?” Mike and I looked at each other whale-eyed. I think his bladder felt the same as mine.

They told Mike they wanted to work with him a bit to learn all she knows so they can continue giving her the best obedience. Mike and I tag-teamed with them for about two hours, talking to them about her, showing them her quirks and outstanding qualities she had. It was sort of like a Batman and Robin kind of thing. Him being the one that created her as what she is today (without him she would have never had a chance,) and me going for the gold in showing these people a dog that were not anything that they expected to get. Both of us also sneaking away calling all of our volunteers and staff to tell them of the amazing news. After 20 months of living in a shelter, Louise was getting adopted.

My amazing Dog Counselors got together to do a late-night adoption. When they were completing the paperwork I had a rush of emotions, I probably looked like a zombie or just a plain idiot since I was sitting on the bench staring at the ground trying to comprehend what was happening. People started piling in the place taking pictures and crying with joy and asking me how this happened and I think I managed to muster up a, “Uh… I don’t know.”

I worked with these people for about six-and-a-half hours and they were not even looking for a female, nor a dog that needed to be an only child, but they gave her a chance. I didn’t show her to them because they were dog savvy, nor did I do it because they didn’t care about hospital bills or any other expenses, I did it because I knew for a fact that whatever dog I sent with them would be in their home forever. These were the kind of people that didn’t give up on their dogs. Dogs were family to them.

The woman earlier in the day looked at me and said, “There’s a reason why dog is GOD spelled backwards. They provide you unconditional love and they are the closest thing on this planet that you will get to God.” She was literally a godsend.

Louise has been the love of my life for a very long time and I can’t begin to relay how lucky and happy I am to have been a part of her life and help her find her forever home. She is a true example of what we do at APA!. We gave her a chance when nobody else wanted to. I thank God for her and my coworkers and Mike every day. If it wasn’t for him and everybody else, I wouldn’t have had her in my life. I will think about that girl every single day.

Louise has been at Austin Pets Alive! since November, 2011. Following a horrible start to life, hers was almost taken due to behavior. APA!’s Dog Behavior Team has worked with her in tremendous ways over the past 20 months. This summer, Louise was the first to be awarded with the Canine Good Citizenship certificate at Austin Pets Alive!, a program launched by AKC and now a part of our extended care with pets. As one Austin Pets Alive! said following Louise’s adoption late Friday evening, “This is why we are here!”