All Hands On Deck

“About 45 mins until we should be ready for puppy delivery” is the text that went out to a team of APA! staff and maternity ward trained volunteers on December 12. Vienna, a mixed-breed dog was ready to deliver her puppies. However, due to several complications, an emergency Cesarean section became necessary to give both mom and pups the best shot at life. 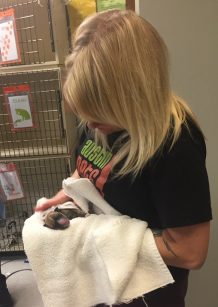 In many shelters, a pregnancy will be terminated, no matter how far along. APA! believes in giving these puppies a chance at life - even if medical intervention is necessary. Giving a pet a C-section isn't very common, and because the babies are delivered by the veterinarian much more rapidly than they would normally be born, more people are needed to help do the work the mama dog would normally do.

As the vet delivered each puppy, it was immediately handed off to a person for stimulation and clearing of airways. When performing a c-section on a dog, it is crucial to stimulate the newborn puppies vigorously for several minutes. The team must also monitor the newborns for problems associated with anesthesia.

As with any major surgeries, complications can arise. For a while, it seemed like only one puppy in the litter would survive. However, the incredible medical team at APA! refused to give up on the newborns and by the end of the night four puppies were cuddled up with their mother.

The medical team continued to work nonstop into the late night, monitoring not only each puppy’s vital signs but also making sure that mom Vienna was staying strong. You can see more of the day's events in this album.

Today, thanks to the dedication of an incredible group of people, four happy and healthy puppies are living with mom in a foster home.
And, #thankstomaddie you can watch the puppies on a livestream here!