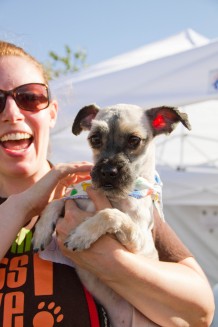 Through American Pets Alive, our national branch of APA!, we’ve been able to expand the heart of our mission and help other communities focus on becoming no-kill. Just two weeks ago, our own executive director Dr. Ellen Jefferson spent the day at San Antonio Animal Care Services (ACS) living out that mission. San Antonio ACS has recently re-committed to becoming a no-kill community, and alongside shelter staff, Dr. Jefferson helped review, update, and modify their intake vaccination protocol to ensure that all the dogs were receiving the life saving vaccines on time, every time.

“Giving vaccinations immediately upon intake is absolutely necessary to create and maintain a no-kill shelter,” said Dr. Jefferson. “There are terrible diseases that essentially exist only in shelter environments. The spread of diseases such as canine distemper could nearly be eradicated with timely and appropriate shelter vaccination procedures.”

Vaccinating before entering is one of the most crucial decisions a shelter can make as they pursue a no-kill model. A vaccination can provide nearly immediate protection for an animal against disease. Distemper is a big problem in San Antonio, particularly for animals adopted out of ACS.  If distemper is a problem for any shelter’s adopted pets, that means that shelter is not vaccinating appropriately upon intake.

The vaccine, given before the animal enters the shelter, will not prevent the disease 100 percent, but it will prevent the death of that animal from that disease. Instead, the pet may have a cold or even a severe cold but they will not have seizures and die the way they do if they are not vaccinated before entering the shelter.  Since distemper is airborne, the moment an animal enters the shelter, it is exposed.  If an animal is vaccinated after that exposure, the vaccination has no chance of providing a benefit.

Not vaccinating at intake leads to devastating consequences that inevitably lead to an avoidable amount of suffering. APA! knows firsthand how important it is to prevent dogs from being infected by these diseases. Last year, Austin suffered the same problem until City Council offices got involved and demanded vaccination protocol implementation.  Because of the horror that APA suffered caring for the dogs affected by distemper last year, the organization has become somewhat of an expert on the subject of prevention, spread, and treatment of the disease. The newly created Ozzy’s Team is a project in memory of a beloved puppy named Ozzy A Boxer, who tragically passed away after a valiant battle with distemper. Ozzy’s Fund was also established to help other dogs with distemper get the treatment they need to have a chance at survival. San Antonio ACS shelter director, Gary Hendel, implemented the new vaccination policy last week and by doing so, has created a new era of life saving.  Now when a dog is rescued or adopted from ACS, it has a much better chance of living a long healthy life.

In late September, American Pets Alive! hosted our first-ever conference and was able to share information about some of our key programs and successes with animal rescue groups from around the country, as well as groups in our own backyard. By reaching out, and engaging and empowering communities around the country, American Pets Alive! is sure to be a catalyst for more communities going no-kill. And hopefully, San Antonio will be embracing its no-kill status soon.