Every month, Austin Pets Alive! awards one of our stand-out volunteers as the Volunteer of the Month. For the month of April we are thrilled, alongside Austin Subaru and AW Media, to honor current APA! volunteer and retired school-teacher, Frank Martinez! (Check out the awesome video Austin Subaru created on his life and impact by clicking HERE!) Starting in April, Austin Subaru has given us the opportunity to feature our Volunteer of the Month in Austin Woman Magazine, and we are excited to recognize Frank for his endless dedication to APA!.

Take a walk through the hallways or wings of Austin Pets Alive! and your ears are more likely to find the joyous, kind sound of Frank. Hard working, warm, and as loyal to helping Austin Pets Alive! as can be, it is with pride to honor him as April's Volunteer of the Month at Austin Pets Alive!. Here are some of the things Frank's colleagues had to say about Frank and his impact on our lives:

"Frank is irreplaceable. I don't know what we would do without him! Not only for all of the crazy hours he helps and works here...his unique personality and sense of humor are unequaled!" - Shayna Hill

"Frank is a man of many talents. He's our general handy man, our dog whisperer; he's our landscape artist, and he's an 'absolute' dog foster who can work wonders. He's just an all around great person." - Linda (Momma) Rulifson

"Lexy calls him 'Frank the Tank' cause we count on him. He does so much for us! No matter what it is, he can fix it. He always jumps in and helps. He's fantastic!" - Lindsay Henderson

"Frank is a very inspirational, hard-working man who is a vital part of keeping Austin's pets alive! And he looks great with his shirt off." - Cassie Olivo

"Frank is the go-to guy when we need something done around APA!, no matter how unglamorous the project might be. He can fix nearly anything, not to mention the magic touch he has with foster dogs - he has changed so many dogs' lives for the better!" - Kristina Jakstas

Thank you, Frank, for everything you do! Congratulations on this, and for your feature as a stand-up man in this month's issue of Austin Woman! You are loved and valued by Austin's animals, children, men and women, every month of the year. 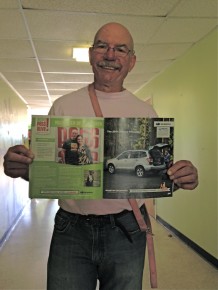