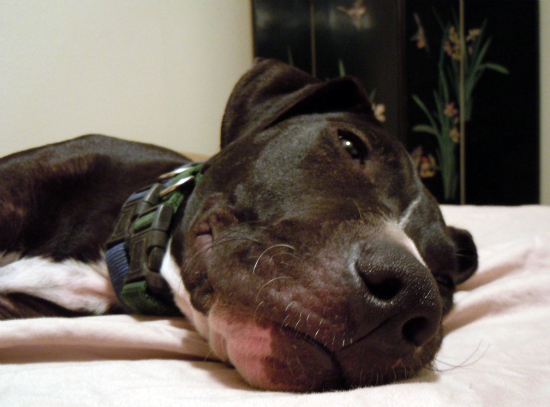 It's hot. That's not news. But Friday afternoon, Austin Pets Alive! volunteers got the news that the air conditioning had gone out in the dog building. Thankfully, many dogs were already cool and comfortable in foster homes, but almost 50 dogs were settling in to sleep in what was sure to be a sweltering building.

Dogs like Adelle and Lola got a bath. George slept on a comfy couch. Artemis watched a movie, well, half a movie -- he fell asleep halfway through it. Some dogs heard and saw TVs for the first time in their lives and got to run free in a backyard. They all got a taste of what their future holds -- a safe and loving home. (With air conditioning!)

We say it all the time: Austin Pets Alive! volunteers constantly go above and beyond for the pets in our care that are waiting to be adopted. Friday night was just another example of their tireless efforts to make the waiting bearable. If you'd like to learn more about volunteer opportunities, email us and we'll fill you in!

Volunteer Michael McDonnell sees another sleepover with Artemis in his future, otherwise "he won't know how Goonies ends!"