Bad Boy Manny Not So Bad After All 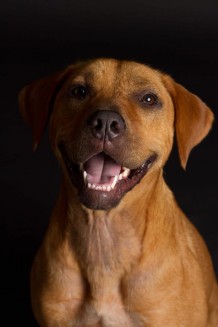 When Manfred was adopted as a puppy with a minor case of mange, he thought the stars had aligned. He knew his new family would help him heal and teach him all the things that a puppy should know.

Less than a year later, little Manny was not so little anymore and was returned to Austin Pets Alive! with what had become a severe case of Demodectic mange and a bad reputation for getting into altercations with other large dogs.

His body was purple and swollen and he was clearly in a lot of pain, but yet he managed to express his delight with a thump of the tail whenever anyone came near him.

Maja decided to foster him and help him recover.

"The first day I brought him home he immediately crawled up on to the couch," she said. "I remember him following me around my home and not wanting to leave my side. Something about the fact that he was hurting but still wanted to be near me made me fall head over heels. A few times I had to remind myself, 'this is only temporary, Maja.'"

But Maja and Manny's relationship continued to deepen as his selfless, protective personality started to shine through.

"One day we were hiking in east Texas and there was this river that was running really fast. Manny was in and swimming and I wasn't worried about him, but then my Chihuahua, Charles, got in and was swept down about forty feet," Maja said.

"I got up to jump in when I saw Manny grab Charles' leash and pull him to the shore. He shook off and walked over to me with a calm face as if to say, 'Don’t worry, Mom, I am here for you and my little brother no matter what.'"

Maja decided to make it official several months into the foster and adopted 65-pound Manny.

She knew it wasn't going to be easy, though. Manny was so reactive to other large dogs on the leash that Maja physically could not walk him.

Rather than give up on walks, Maja instead began a process of learning how to understand him.

"A lot of people feel bad for dogs who have separation anxiety or other issues, but dogs with reactivity are often met with frustration and anger from their owners.

"Once I was able to realize how much Manny was saying in dog language I was able to feel even closer to him. The cues are subtle but they are there."

Maja started to notice, for example, that whenever Manny was uncomfortable as they approached another dog, he licked his lips. Maja showed him that she "heard" him by giving him a chance to cross the street or turn around, away from the other dog.

Behavior Adjustment Training -- or BAT -- is a method many APA! volunteers use for the shelter dogs who have built-up frustration. It allows the handler to look at why the dog is reactive in the first place and to help him meet his needs in other ways. It gives the dog a chance to learn to control his own comfort level, and it certainly went a long way with Manny.

"Manny seems a lot more confident with who he is," Maja said. "We go hiking and camping now and pass other dogs with ease."

Manny's healthy life of backpacking, hiking, kayaking and swimming is a dream come true for the Rhodesian Ridgeback mix, but better yet he now has a loving family who celebrates his wins.

It's been a blessing for Maja, too.

"Having a large breed dog is one of the best gifts I've ever given myself," she said. "I feel so incredibly safe with him and I know he would do anything for me. Curling up with a giant teddy bear at the end of a long day is the greatest reward."