Beau is a great example of how APA!'s Dog Behavior Program is able to expand the definition of what "an adoptable pet" truly is. 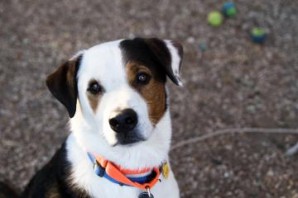 Beau is a 3-year-old Collie Mix that is as handsome as he is large (weighing in at over 60 lbs).

In Beau's time at the APA! headquarters, he was social and sweet with both people and other dogs. However, after being returned to the shelter twice, it was brought to the Dog Behavior Team's attention that he suffered from fairly significant territorial issues once he was in a home that he considered "his". When this was known, Beau was taken to a foster situation with one of the behavior staff members, so an appropriate training plan could be devised.

After two weeks of analysis of his behaviors, Beau's training plan was created. Pre-adoption and post-adoption training sessions with a new family were going to be a mandatory part of Beau's success in a new home, along with diligent following of the skills he already learned from the Behavior Team while at APA!

A few months down the road, Beau met his new mom. The family that adopted him took to his training plan with full-commitment and was happy to learn everything that the Dog Behavior Team had to teach her. To this day Beau is excelling in his new environment. His family continues to stay in contact with the Behavior Team so everyone can stay up to date on Beau's progress and successes. Beau is happily in a forever home and working on his skills to maintain a peaceful and happy life. The following video is an example of some of the training that Beau and his mom  learned under the guidance of the Behavior Team, helping train a pet in need to be a pet in a forever home. We're excited to be able to give him and others a chance they normally wouldn't have.

APA!'s Dog Behavior Program features one of our many developments to help save the lives of rescued pets. To help us raise $25,000 this summer and continue with great stories such as this, please click HERE to donate. Remember, if we reach $25,000 this summer, a private donor has promised to match this donation with an additional $25,000! Together we can provide that to Austin's rescued pets and keep saving lives.