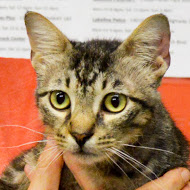 Bengal is a handsome 3 year old brown tabby rescued by APA! last August. Bengal, like many cats in shelters, showed signs of being really stressed out. Cats are sensitive animals, and can easily contract an upper respiratory infection when they are stressed & exposed to illness. For Bengal, in addition to a stuffy nose, his stress also came in the form of obsessive scratching. He had large open wounds on his neck, jaw and behind his ears that he continued to scratch until he was forced to wear the dreaded e-collar.

By November, Bengal's sniffles cleared up, but his skin continued to be a problem. He had been on several medications that never really helped, and it was decided a biopsy of his skin would help determine the root cause of all the itching. Through donations, Bengal's biopsy was completed and revealed that he had skin allergies. The next strategy to curing Bengal was to move him to a foster home and go on a strict food trial in a calmer & quieter environment than a busy cat adoption center. 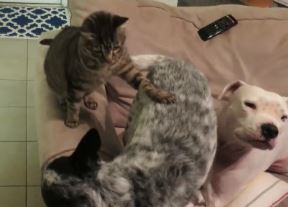 At first in foster, Bengal showed some signs of anxiety and stress with over-grooming when kept in isolation (a short isolation period is standard protocol for fosters with other pets). It seemed that he really wanted to get out and explore the house and meet the 3 resident dogs! Bengal gets along great with the dogs, though he has never been too fond of other cats. After just two weeks in foster, he rarely itched at all anymore & was settling in nicely!

The magic combination of a specific brand of food & a calm home environment has helped Bengal put the itchies behind him, and now it's easily managed. Taking the time to properly diagnose and work with Bengal through both medication and food trials, along with good communication between the cat staff, medical team and foster shows that true teamwork is behind every rescue.

Now, Bengal is ready for his perfect family who will continue to feed him Nature's Variety Instinct Limited Ingredient Diet canned food in Turkey or Salmon. Bengal also likes the Duck formula, but can get a bit pudgy when on it. This variety of food is readily available at pet stores. Bengal will also need to be kept on a good quality monthly flea preventative. 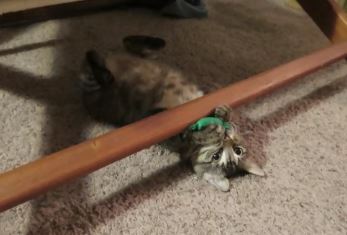 But we'd be remiss if we didn't also highlight Bengal's playful and fun personality! Bengal enjoys catnip toys or feather wands, showing the dogs who's boss, and following his human companions around. Bengal is very social and likes to be where the action is. Nobody puts Bengal in a corner!

​Here's a short video of what life is like with Bengal. To learn more about Bengal, here's his profile. ​