Austin Pets Alive! isn’t the only place that uses big brother and big sisters to make an impact. The Big Brothers and Big Sisters of America has been matching mentors with human “Littles” for over 100 years. The relationships formed within this program have had a lasting effect on the lives of these young people – much like APA! “Bigs” do on our pups.

Margaux Vatel, an APA! foster and volunteer of two years, decided that she wanted to make a big impact too – in the lives of a human “Little.” When Margaux met Angel for the first time, she didn’t speak.

It wasn’t until Margaux introduced Angel to her foster dogs that Angel began to open up. 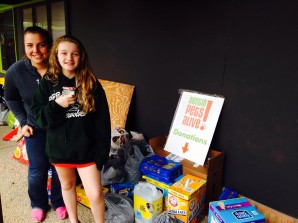 Angel helped Margaux with baths, walks, training, and naming the fosters that passed through her home. They even spent a day making treats from scratch. It was clear to Margaux that her love of APA! could help Angel find the extra friends and support she needed.

Most of us can recall the difficulties of being a 5th grader: bullies, self-doubt, insecurities and the terrifying leap into middle school. Margaux wanted to do something to help show Angel how beautiful, smart and selfless she truly is. That’s when they decided to organize a fundraiser on behalf of all the dogs and cats of APA!.

The one catch – Angel had to do it all herself! 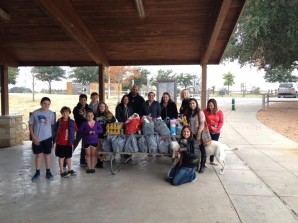 It took eight weeks of planning to pull the event together with Angel coordinating every detail each step of the way. She spent time conducting interviews with APA! volunteers, passing out flyers to family and friends, and collecting donations. Angel doesn’t much like talking to people – so giving the interviews alone was a feat!

On the day of the fundraising event, Angel welcomed guests and received an unexpected outpouring of support and generosity from friends and family. Despite her fear of public speaking, Angel had even prepared a thank you speech and delivered it flawlessly to a group of close to 20 attendees.

Margaux saw the impact not only she had made, but that APA! can have on a young, shy girl – helping her blossom into a confident young woman.

Once the donations were compiled Angel’s Fundraiser had collected:


This was definitely a day that Angel and Margaux will never forget.


“Austin Pets Alive! has made our relationship a lot stronger and Angel has grown because of it. How many ten year olds can say that they organized a fundraiser and that it was a huge success!?” – Margaux Vatel