Bill and Charlie Amplify their Contributions

Charlie already knew his dad was a hero.

But Bill Symon wanted to do more.

Meet Bill, an animal lover with a background in online marketing. He adopted his dog, Charlie, a little over one year ago.


“Charlie was a mess. He had been abused, had distemper, was not potty or leash trained…. and we brought him home the day we met him… He needed to be rescued.” 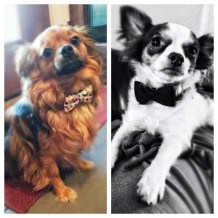 Charlie is one of many examples of companion animals that likely would have been euthanized had APA! not stepped in with innovative programming and a back pocket full of passion and enthusiasm.

Knowing this, Bill stepped in to an inspiring realization, “I wanted to help out. I felt like I needed to give more to the organization that gave us this great companion.”

One major way that Bill has given back is by being a huge supporter of APA!'s Amplify effort. “I thought I would try to leverage my business background and personal network,” he says. Bill set up his own personal donor page and recruited friends and family to donate to the cause.

Well before Amplify had officially begun, Bill had raised 88% of his personal fundraising goal. His strategy was simple:


“I even had people reach out to me on Facebook that I haven’t spoken to since High School. They were inspired by my post… so they donated.”

More than pleased with his most recent effort, Bill has set his heights even higher for next year: “Hopefully I can double my goal.”

Bill and 1,314 other APA! supporters collectively raised over $96,625.41, landing APA! as the 6th most popular nonprofit in 2014 and earning the organization a few titles: most donors within the first hour and most unique donors overall.