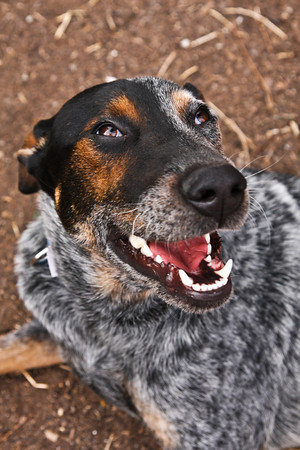 Blue Boy is a very handsome blue tick Pointer.  He is long and lean with a docked tail.  He has very soft eyes and is everyone's friend.

We found Blue Boy at TLAC on the euthanasia list.  He had been found in someone's front yard, hit by a car.  He couldn't get up.  TLAC gave him pain control and kept him alive for three days to allow his owner to find him. The owner never came.  The day he was set on the euthanasia list, he got up for the first time.  When we saw him, we saw that he wanted to live but was just a little broken.  His left leg and scrotum were hugely swollen.  The leg kind of dangled.  He never growled or tried to bite as we touched his painful areas.

A fabulous volunteer transported to and from Animal Trustees of Austin who took xrays and catheterized his bladder.  They said that there was so much urine backed up in there that he must not have urinated the whole 3 days he was at TLAC.  He went to surgery for a broken hip and then went to another fantastic foster.
As his bones healed and he became more and more like a regular dog, his urethra got worse.  He again could not urinate.  This time however, the doctors couldn't pass a catheter either.

He was taken to surgery again to try to pass a catheter from his bladder down through his penis rather than the other way around.  No luck.  He had developed a stricture in his pelvic canal.  Since the stricture is in the middle of the bone and muscle of his pelvis, it is unreachable to fix surgically.  The only option is a procedure called a prepelvic urethrostomy.  This procedure basically cuts off his urethra so he no longer urinates out his penis.  It is redirected so that he will have to urinate out a hole in his belly.  He should have perfect house training abilities because the bladder can still work, but he will always be a little strange looking when he urinates.  The risky part is if his bladder has been stretched beyond repair from the days of not being able to urinate.  We don't think this is an issue but it could be.  If that happened, he would be permanently incontinent.  While he awaits surgery, his bladder has to be emptied with a needle and syringe (poor boy).

Blue Boy is so sweet.  He is submissive with other dogs and is really silly with people.  He loves to be pet on his belly (even after surgery) and loves rawhides.  He thinks cats are pretty exciting but is not interested in chasing them down and eating them.  His current foster has a pot bellied pig and he is pretty alarmed by that.  He keeps barking trying to tell the foster that there is something very wrong with that really fat furless dog!

We are looking for a special home for this boy.  He has been through so much since his accident and he

just remains the friendliest and sweetest dog.  Please keep him in your thoughts and hope, with us, that the surgery is a success. 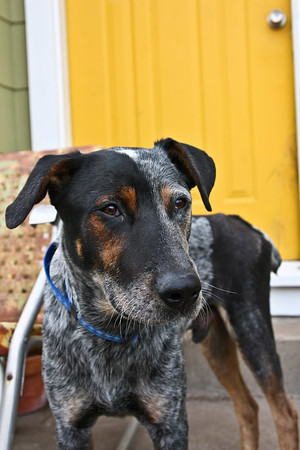