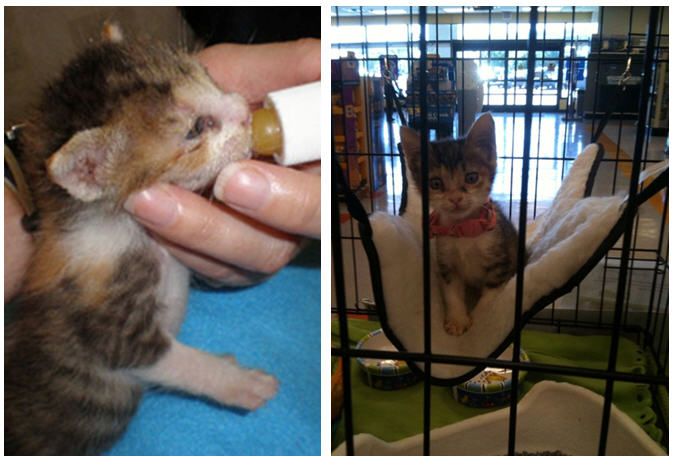 It's been awhile since we've posted statistics for the Bottle Baby Program, but we've had a lot going on! During this time, we've moved from the small trailer on S. Congress to the Nursery in the new building. We've also been astounded by the length of this kitten season! We have been able to rescue record numbers of kittens, partly because of the added space we have in the nursery, but also because of the dedication to our volunteer feeders and caregivers. However, the number one factor in the volume of kittens this year is the mild summer we had. Every shelter and rescue organization in our area has experienced extremely high numbers of kittens, as cats were able to produce multiple litters between March and September. So, let's take a look at our stats:

During September, we rescued 91 kittens. This included a nursing mom and her seven kittens. Unfortunately, mom got an upper respiratory infection while at the shelter and passed it to her babies. Babies with stuffy noses can't nurse, and we lost half of her litter. It is critical that we keep a "revolving door" process in our program so that we can take in kittens as soon as they enter the shelter. But we can only do that if we have the space and volunteers to care for them. This is where our foster homes become the key to survival. If foster homes can take some of the kittens in our care, we can rescue quickly more animals from the shelter.

During the same timeframe in 2009, we rescued and placed 17 kittens in the Bottle Baby Trailer.

In the month of October, we rescued 73 kittens. During the same timeframe in 2009, we rescued and placed only TWO kittens and even a litter of Sharpei puppies in our Trailer! Puppies are always welcome into the Bottle Baby Program; however, they don't experience the same population explosion during a "season" like the kittens do, so they are far more likely to go directly to foster homes. We would love for this to be the case for the kittens, as they are able to thrive more quickly in a home environment than in a crate or cage in the Nursery. Several other kittens were rescued and went directly to foster. Our Bottle Baby Trailer didn't have a good heat source, so it was critical that we moved kittens to homes as soon as we could. This year, our building has heat and the Nursery is always kept a little warm so our babies can stay cozy.

Our survival rate is still impressively high at 90%. We have some new programs we are implementing for next year to help achieve an even higher survival rate. The first of which is already underway. We have constructed a bank of cages in the Nursery to better accommodate nursing moms. As soon as the shelter notifies us that they have a nursing mom, we will place her and her kittens in our nursery. Our hope is that this will prevent her from getting the cold that can be so deadly to her kittens. An added benefit, which we have experienced when we've had nursing moms in foster care, is that if her litter is small, we can place our tiniest bottle babies with her so they has the absolute best chance for survival.

Adoptions are still occurring daily at all our adoption sites, and you are guaranteed to meet one of our former babies if you stop by! Nothing is more satisfying than seeing the tiny babies strong and healthy at their first adoption event. Pictured is one of the more unique kittens we've rescued: a Manx (no tail) Polydactyl (extra toes) torbie calico. She was rescued at about 2 weeks old as a bottle baby in our "I9 Litter." She was pre-adopted at 6 weeks old, and is now in her forever home with her sister! She is shown being bottle fed at her first week in foster care, and again at her first adoption event! Who couldn't love that face?!

To donate to the Bottle Baby Program, click HERE. You can also FOSTER or VOLUNTEER.