Summer is a very busy season for the APA! Parvo program. 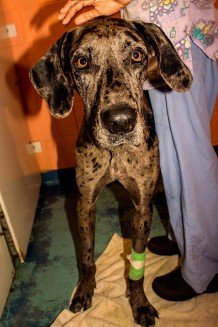 This summer’s Parvo patients included Zathura, a 2.2 lbs puppy, 14 kittens with feline panleukopenia, and one special Great Dane named Filly (pictured on the right). Filly came to APA! as an owner surrender with a lot of fear and anxiety. Early in her stay in the Parvo ward, Filly cowered from people and didn’t like her head or neck touched. Because of her fear, special precautions were taken when she was treated. After several days surrounded by caring volunteers, Filly started warming up and calming down. By the end of her stay she had gone from flinching away from people to jumping up and giving them unforgetattable Great Dane hugs and kisses! Two days after her release from the Parvo program, Filly was adopted into a wonderful home and given the name Lulu.

This is just one of several hundred success stories from the Parvo Ward so far in 2014. In fact, the parvo program saved an average of 75 lives per month this summer. These are puppies that would have otherwise be euthanized.

Why do puppies with parvovirus often get euthanized?

Parvo is a highly contagious virus that mainly affects dogs. The symptoms may include depression, vomiting, diarrhea and in some cases, death. Parvo requires extensive care and many shelters are not able to treat dogs to this extent. Continuing, the set-up of most shelters cannot keep parvovirus from spreading to other animals in their care.

But by developing a quarantined intensive care unit devoted exclusively to treating dogs with parvo, APA! has been able to save several hundred lives over the past few years.

What happens to a dog in APA!'s Parvo Ward? 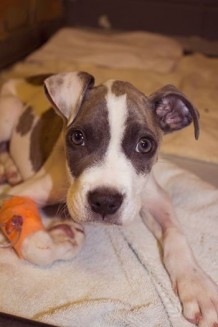 When a dog tests positive for Parvo, they are transferred into the Parvovirus ward. The average stay for a dog in the APA! Parvo program is one week, but 10% to 20% of dogs require critical care for up to 2 weeks. While there, they are cared for and treated by medical clinic staff and trained volunteers. The treatment varies from animal to animal but the survival rate in APA!'s ward is impressively high each year, reaching nearly 90% at times (significantly higher than average).

At its height during the summer months of 2014 as many as 26 dogs, including Kori (pictured to the right) were under care in the Parvo program, requiring extra kennels to be set up and extended hours for volunteers.

What does the Parvo program need?

The Parvo program currently has 17 active volunteers, but is seeking 2-4 additional volunteers, particularly those with availability on weekday mornings. If you are interested in volunteering with the Parvo program or any other departments at APA!, please contact [email protected] Additionally, the average cost of treatment for each dog stricken with Parvo continues to increase. The number of lives the ward is able to save is tied to available funding. If you would like to give a second chance to a dog like Lulu or Kori, please donate now.