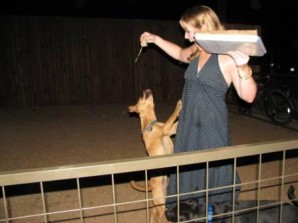 It’s only been open a few weeks, but everyone is talking about Banger’s Sausage House & Beer Garden on Rainey Street. My human took me last Thursday night to enjoy the food, beer and live music.

Here are the top three things I (and other canines) love about Bangers:

#3 – CUSTOMER SERVICE. The folks who work at Bangers are animal lovers. They greeted me before they greeted my human and gave me a lot of compliments on how cute I am.

#2 – AMBIANCE. The fenced in dog park in the back was awesome. There was plenty of cold water and butts to sniff. My one recommendation on the dog park is that Banger’s should enforce a code of conduct – there was one particular black lab that continued to relentlessly pursue me (see above mention of my cuteness). I was uninterested in his advances, but that didn’t stop him trying to get some action. I prefer a more traditional approach to courtship. But I digress, the dog park was pretty awesome.

#1 – FOOD. Two words. DOG SAUSAGES. I tried the Bow Wow Boudin (pork, chicken livers, rice and veggies) and the Woofwurst (pork, beef, lamb and veggies). Both varieties were delectable. These tasty treats were made-to-order and, the best part is that a percentage of their proceeds are donated to Austin Pets Alive! I love doing a good deed and supporting other dogs like me who deserve to live. Plus, did I mention these sausages are delish?

The owners at Banger’s said they are aiming to be the most dog friendly restaurant in Austin. Based on my experience, they are well on their way to achieving this goal. Overall, I give the experience an overwhelming 3.5 paws up. if they would have served some dog beer with that canine sausage, it would have been a four paw experience.

Help support Austin Pets Alive by going to Banger’s and getting some dog sausages for your canine. They'll donate 10% of sales of the dog sausages to APA! That’s a win-win. If you can’t make it to Banger’s, you can donate directly to APA.

About Bixby – Bixby is a former Austin Pets Alive! rescue dog who now lives in Central Austin with her human, Kim. Bixby is always seeking out adventure and enjoys the finer things in life. Her goal is to patronize every dog friendly venue in Austin.