On May 19, 2011, Austin Pets Alive! opened the Tarrytown Adoption Center in West Austin. This boutique adoption center features 12 cats/kittens who live there full-time while they await permanent homes, as well as pre-adopt foster puppies who come in for the day on the weekends. When it opened, Tarrytown was projected to help APA! save an additional 200 lives in the first full year. APA! is happy to report that this adoption center has far surpassed that goal!

As of February 6th, Tarrytown has seen 212 adoptions and we have only been open 9 months! The adoption breakdown is as follows: 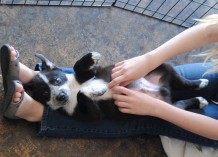 
In addition to animals and adoptions, the Tarrytown center is very community-driven with support from Casis Elementary's "Leadership Casis" - a group of 5th graders with an interest in community service who sponsored one of the cat habitats. The Tarrytown Adoption Center also received support from The Girl's School and even named the meet & greet room in honor of Courtney Griffin through a generous donation (she was a beloved APA! volunteer and supporter). The Tarrytown Adoption Center also features collars, catnip toys, t-shirts, jewelry and other APA! goods with proceeds benefiting the animals. 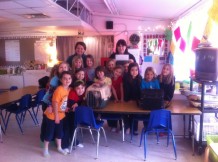 Tarrytown is just one of the many cat adoption locations APA! has around town. Two newly opened adoption centers, Lakeline Petsmart and Lakeline PETCO, are buzzing with adoption activity and are on track to far exceed their goals. In fact, Lakeline PETCO opened just a month ago and has already seen around 30 adoptions!

As kitten season fast approaches, APA! needs to find as many of the existing cats and kittens homes as possible just to simply make room for the new ones awaiting rescue at our local shelters. Consider visiting any one of our adoption centers to meet our kitties, volunteer and adopt!

Specific cats and store hours at each location is listed daily on the APA! website.