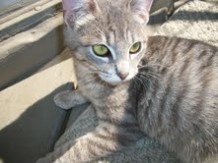 Conroe is a 6 month old blue tabby kitten who came to us in January with a broken and dead tail. For many cats & dogs a dead tail means that they cannot control their bathroom duties. At first, Conroe was no different. He had suffered a tail pull so severe that it caused nerve damage and loss of control. He needed his bladder expressed regularly and was pretty messy with the litterbox. At the time he was neutered, it was decided that his tail needed to be amputated to improve his quality of life.

But Conroe is a champ! Removing his tail gave him a new lease on a life and has sent him on the path to being normal kitty!! He has a new spring in his step, a hop like a bunny,  and after a short time on a temporary Raw Diet, his stools firmed up. Conroe has recovered control of his bladder and has impeccable litterbox manners. He has improved dramatically and almost has total control of his bowel movements with rare incidents. His only remaining challenge is that he may start going, ah hem, Number Two in the litterbox, but may finish just outside of it. Considering that Conroe's life was given a deadline because of his circumstance, he is a miracle. 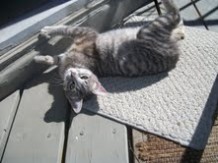 Conroe's diet now consists of a Limited Ingredient dry food, available at Petco or Petsmart. His foster mom is confident that Conroe would make a special adopter very happy. He gets along with other animals and enjoys snuggling with the other cat in the foster's home. He also enjoys time on the enclosed porch for sunshine. He's a real charmer, and we encourage interested adopters to meet him!

For more information on Conroe, you can visit his online profile HERE. If you have questions about the adoption process, send an email to [email protected]