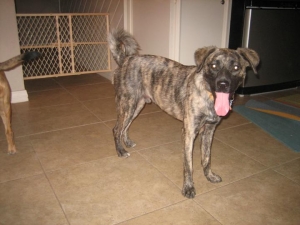 Curly was first described to me as being extremely intelligent and high-energy. This spelled one thing to me – trouble! I had never fostered a dog before, but I decided to give it a shot with Curly. I was hoping with a little instruction, consistency, and most of all patience, I could transform the mischievous Curly into a well-mannered pup. However, even with an optimistic outlook, I was having some doubts as I drove to get Curly. 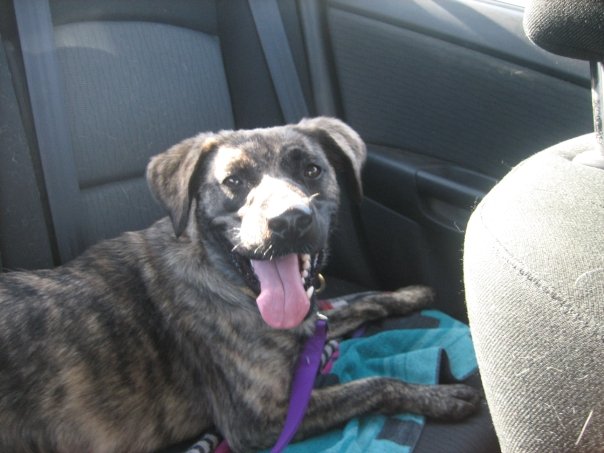 When I first picked up Curly, I quickly learned that he loves car rides! He relaxed in the back seat and sniffed out the open windows as we drove to his new foster home.

When we got to my house, I introduced Curly to his foster brother and sister through a baby gate. They sniffed each other like crazy but weren’t showing any signs of aggression, so I went ahead and released Curly into the pack. The three dogs wrestled around for a bit, and eventually my two dogs ran out the dog door to move the playing outside. Proving his intelligence, Curly took one look at the dog door and bolted outside himself!

That first night, Curly played and played with his new foster siblings and ate dinner/slept in his crate like a champ. Curly looooves his crate and does not complain at all when you put him in there. One of my favorite things about him, though, is when I let him out of his crate and he stretches really big and then comes up and rubs his head on me in hopes for a pet.

In addition to loving my dogs, he's also quite a lover with me. He likes to climb into my lap and kind of flop on his back while I'm petting him.

Curly IS a curious  dog, so he has tried jumping up on the couch or near the counters, but with quick correction of the behavior he hasn’t done any of those things since!

I have been taking Curly for runs in the mornings to work out some of his energy before he spends all day in his crate. Curly is AMAZING on a leash (with a harness). He does not pull, bark, or dart after things. He likes to walk right next to me and whatever pace I'm setting. It’s hard to believe he’s new to this whole leash thing!

Curly is a great dog that just needs a lot of exercise and consistency with behavior correction. I think he would do best in a home with a big yard and maybe another dog or two to play with. He definitely likes going into his crate to sleep and eat, and would probably LOVE an owner that wanted to take him running on the hike and bike trails.

As much as we love Curly, we can’t wait for him to find his forever home so he can finally have some stability in his life.