Austin Pets Alive! came into existence because a group of incredible people, like you, fervently believed that all pets, no matter their past or vulnerability, deserve a safe journey home. Since then, APA! has found ways to ensure that shelter pets are given the resources and help they need to avoid facing unnecessary death; but we cannot sustain these resources on our own. Because of people like you, who help us continue to carry out the mission of APA!’s founders, we are able to save thousands of lives every single year – lives like DJ’s.

Thanks to an incredible savior named Angie, DJ’s life didn’t tragically end when it was completely turned upside down. His story begins a few months back when Angie’s husband casually went to the gas station by their house. The clerk that was working was concerned because her relief, Miss Evelyn, hadn't shown up for her shift. The clerk called the sheriff’s department for a welfare check, but she hadn’t heard back for hours. Angie’s husband got Miss Evelyn’s address from the clerk, then went home and told Angie about the situation. Angie, concerned by what she was hearing, agreed that it was best that the couple drive to Miss Evelyn’s home to check on her.

When they arrived at Miss Evelyn’s house, they could sense something was wrong. All they could hear from the house was very aggressive barking: “I called the sheriff’s office to let them know that we found her house, and my husband walked up to the house and knocked on the door to be greeted, through the window, by this behemoth dog,” recalls Angie. “He was so scared and barking in a way that would terrify most.”

Five people tried for over three hours to get the dog to come out, but DJ would bark at them, then run to the back of the house barking, then run back to them, and then back to the back of the house. At this point, because of the rural area they were in, Angie was fearful the deputy would turn to his gun in order to get in the house; but thankfully, this deputy was determined to get DJ out alive. Eventually, they made entry to the home, where they found DJ’s owner deceased in the area of the home that he had been running back and forth to. DJ had been trying to call for help.

“My husband and I told the deputies that we would take DJ home. The county that we’re in doesn’t have anything for strays, or in DJ’s situation, dogs with recently deceased owners, and we wanted him to stay alive and safe,” shares Angie.

Initially, DJ had trouble adapting to his new environment. He missed his old life and went on a hunger strike to prove it: “He’d eat tiny bits here and there, but not nearly what he needed. I took him to his mother's funeral. He had a barking spell and was very curious about what was in the big box at the front. He knew, and it was heartbreaking.”

“My heart breaks for DJ,” Angie’s email, pleading APA! to rescue him, read. “He deserves to have a happy rest of his life with a family. He deserves to run a big yard whenever his heart desires. He deserves endless amounts of tennis balls and someone that will give him a million hugs and kisses every single day. I wish that I could be that person, but my pups won’t allow that.”

DJ now has that chance because of you. Your support allows for programs like PASS, Positive Alternatives to Shelter Surrender, to take in dogs from rural Texas when they have nowhere else to turn. DJ is now living the good life in a loving foster home while he waits for his forever home.

After a tearful goodbye the day he arrived in Austin, Angie turned to us to say thank you one more time: “This was our last shot. We drove over four hours to get here and this is a dog that’s not even ours. We just promised we’d do everything we could to give DJ the best chance, and ya’ll are giving him the chance that no rescue or shelter between Beaumont and Austin would give him. It means the world to us. You’re saving DJ’s life.”

By giving today, you making it possible for more pets like DJ to have access to resources like PASS and fostering. Together, we can ensure that more pets are given a safe journey home. 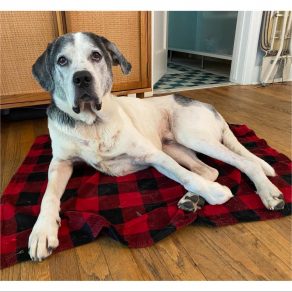 How to Ease Your Dog's Transition When Moving