Tired of dating immature mama’s boys, but still want someone who knows how to be affectionate and fun? Donald’s attributes would make for an ideal personals ad at a dating service: handsome, healthy, courteous, charming, good listener, looking for a committed relationship.

For those of you wondering if the stars will align in a love-match, Donald’s zodiac sign is probably Libra (signified by the scales) because he’s well balanced: playful, but also mellow; handsome, yet unassuming; affectionate and loving without asking too much in return. 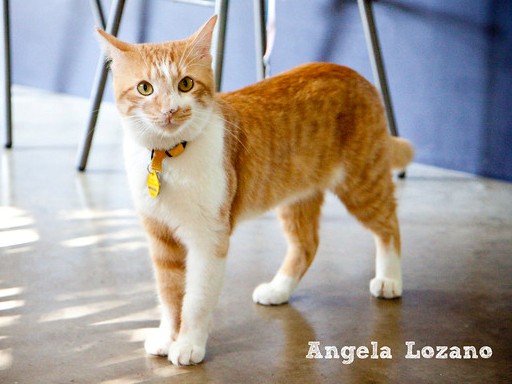 This white & orange charmer loves a nice scratch behind the ears or rub under his chin. Long and lean, this fit fellow weighs in at about twelve pounds. His age is estimated to be a bit over five years, but he plays like a curious kitten when he encounters a pen or toy on the floor.

Unlike a kitten, Donald is quite independent and mellow. He likes to be near people, but not all over them. No Velcro action here. And, like many of us, he adapts slowly to change, gradually acclimating to new environments.

Check out Donald in action at his foster home

With his impeccable house-manners Donald typically does not hop up on furniture and he’s not one to climb the curtains like some youngster-cats. He usually promptly presents himself when called and prefers to curl up under his person's bed for his cat naps. We all value our personal space, right?

Donald tends to be a quiet fellow, except for the occasional “Who goes there?” meow at night.... He’s just looking out for your safety.

Donald’s foster-mom has not observed him with other pets, but can vouch for polite encounters between Donald and a three-year-old human. Wow, he’s even good with kids! What more could you ask for in a potential beau? 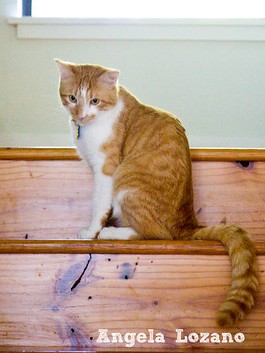