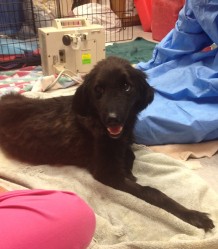 Dove is a 2 year old Australian Shepherd mix that was adopted out as a puppy by APA, but unfortunately recently brought into another area shelter as a stray, meaning she either got lost or abandoned by her owners.

She was found in very thin condition, with mats and feces stuck between her paws. She also has acute kidney failure, which may be due to leptospirosis, a water-borne pathogen. Dove was immediately taken in by APA, hospitalized, and given intensive treatment to help her survive kidney failure. At one point, she stopped producing urine and started having trouble breathing because her fluid was going into her lungs. We were able to give her kidneys an extra boost with a continuous IV medication and eventually her breathing returned to normal.

Because leptospirosis is zoonotic (contagious to other species, including humans), Dove is only able to be handled with gloves and gown and has not been able to go outside. We would like to run a blood test to recheck her kidney values and confirm whether she has leptospirosis. She will also need continued care for kidney failure and special treatment to get her up to a proper body weight. We hope that eventually we can clear her of leptospirosis and give her back a normal, healthy life.

Can you help cover the costs of Dove's testing, and get her on the path to continued care?