The 2011 Best Friends No More Homeless Pets Conference was packed with experts, advocates, and devout animal and no-kill enthusiasts. What they all had in common was the passion to create and maintain no-kill communities across the country. So, naturally APA!’s own Dr. Ellen Jefferson was invited to speak about APA!’s nationally renowned success for helping making Austin a no-kill community in just three years. As part of her commitment to American Pets Alive, our national branch of Austin Pets Alive!, Dr. Jefferson has been on the ground in recent months sharing APA!’s recipe for success at home here in Texas, and with animal advocates around the country. 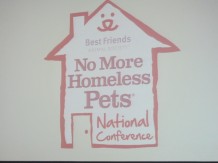 Dr. Jefferson’s speech was definitely one of the most inspiring and helpful of the entire conference. I attended her speech, and it was really refreshing and encouraging to hear a shelter director, who is on the front lines, lay out proven strategies and methods on how to pursue and achieve no-kill goals.

The response to Dr. Jefferson’s presentation by attendees was overwhelmingly positive and encouraging.

“The work of Dr. Jefferson and Austin Pets Alive is work that we felt was important to share with our attendees because it is another example that No More Homeless Pets can be achieved in your community and that there is more than one way to get there,” said Judah Battista, director of animal care at Best Friends Animal Society and the Best Friends representative who introduced Dr. Jefferson before her presentation.

“I had the opportunity to visit Austin Pets Alive [this year].  What I saw made a lasting impression.  Dr. Jefferson is one of those amazing people that looks at challenges and sees opportunities and solutions.  Everyone I met at APA was there to make a difference. That perspective is the perspective that anyone that is going to work toward a no-kill community needs,” he continued.

“I appreciated her straightforward approach to resolving the complex issues that shelters and rescues face, and her innovative ways of taking care of the more common issues,” said Bray, adoption and legislative director of rescue and advocacy organization Game Dog Guardian. 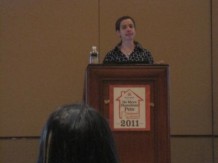 In late September, American Pets Alive!, our national branch of Austin Pets Alive!, hosted our first-ever conference and was able to share information about some of our key programs and successes with animal rescue groups from around the country, as well as groups in our own backyard. By reaching out, and engaging and empowering communities and advocates around the country, American Pets Alive! is sure to be a positive force in the road to creating a no-kill nation.