Eeyore: Let Some Gremlin Into Your Life

Learn How to
Adopt Eeyore Is he part gremlin?  Or frog?  Or, wait, is that a donkey tail?  According to his breed DNA test he is a staffordshire/collie mix with a dash of Shetland sheepdog, but I swear I see some gremlin in that face....!  Whatever he is, his name is Eeyore, and he has found his way into my heart! 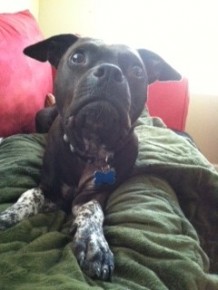 I first met Eeyore in February of 2011 when he was brought to APA from the city shelter. He was found by animal control extremely underweight and suffering from a heart condition. 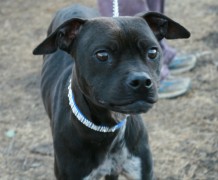 The initial prognosis was grim and he was expected to only live a few months, so he went into a hospice foster.  However, after several months is a caring foster home, he gained weight.  With the right medications sorted out, his heart condition is now under control as well.  Now over a year later he is doing great and expected to live a fairly normal life!  His only limitations are taking his daily medications, a special diet, and no extensive exercise. 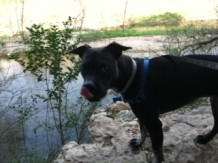 Aside from his medical issues, Eeyore came to APA with some strange behavior quirks too, but with some TLC, training and great foster homes, we know how to manage his behavior quirks.  The only problem?  He is still not adopted! 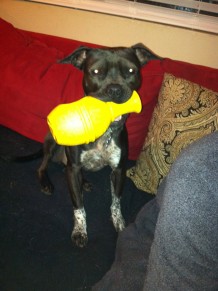 Eeyore does have fixation issues, particularly with cleaning products.  That's right, Eeyore is obsessed with cleaning products, so much so that he can't be around them when they are being used.  Did someone think this was funny when he was a puppy?  Did they tease him and taunt him with the mop and squirt bottle?  Who knows.  What I do know, is we have a fun routine that involves him going in his crate for a peanut butter kong every time I have to clean the house!  But so what?  He is very predictable and thus easy to manage with his fixations.  And I would gladly put him away when I clean (or just not clean at all!), than miss out on the incredible joy he brings to my life. 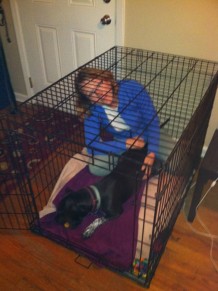 Eeyore, how I love you, let me count the ways!  I love your snorts, your gremlin noises, your urgent need to sit in my lap, how snuggly you are and how you look at me with that precious face with a look that implies, "I think I like you lady!"    You are great in the car, what a perfect travel buddy!  You do great on hikes (as long as it's not too hot out)!  And while you may only have 2 speeds (0mph/100mph), you keep me on my toes! 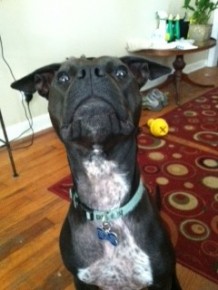 Eeyore does fine around cats and around other dogs but would definitely prefer to be an only dog.  He would do best in a home without children too because he is so excitable.  I promise, if you give him the chance, this little gremlin will find his way into your heart.  After a year in our program, it is definitely time for Eeyore to find his forever home.   :) 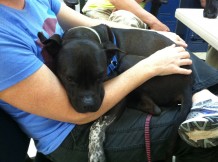