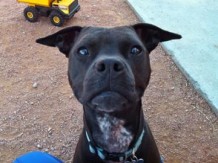 Eeyore is part of our superhero boy posse.  Along with adoptees Brock & Zorro who have recently found homes of their own, he made up our sleek trio of brilliant, athletic, and handsome canines working hard to make the world a better place.  We suspect that this posse still secretly gets together in the night (a la Batman) to fight evils and rescue fair maidens.

But don't worry, Eeyore will be snuggled back up next to you before you even realize he was gone.  These boys are stealthy and the lives they have the biggest magical impact on is that of their adopters...

What exactly makes Eeyore such a superhero?  Not only is he adorable on the outside, he's got the personality to match.  Eeyore is a player, a cuddler, and a training rockstar.  He gets along great with people and dogs alike and loves making new friends. 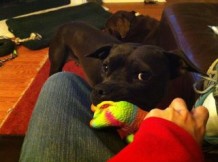 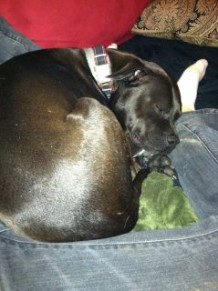 He loves to snuggle. 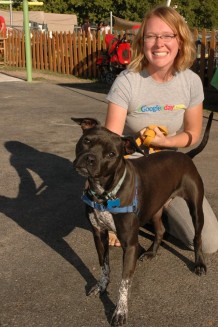 He behaves like the rockstar he is when out & about with his people.

And did we mention he has skills?  This boy has spent time in two of our very best behavioral foster homes and he's got the resume to prove it!  No one sits more nicely, gets into a down faster, knows how to wait or leave it (he actually backs up when asked!), or performs his repertoire of awesome doggie skills with more gusto than our E-Dawg.  What would you expect from a bonafide superdog?

Eeyore is even such a good sport that he lets his crazy people friends accessorize him for special occasions. 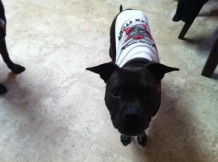 We think he may have preferred the sweet BAD RAP Black Stout t-shirt to the feather lei, but Eeyore isn't one to complain.

Perhaps Eeyore's greatest superpower, however, is his magical powers of transformation and resilience.  This is Eeyore when he came to us.  Completely emaciated and very unsure about quite a lot of things.  In addition to his serious malnutrition, Eeyore had a heart condition that was going untreated. 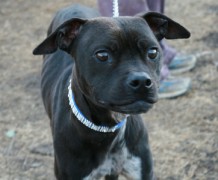 This is Eeyore today.  The supehero dog that we all know and love.  He is on medication for his heart condition that will allow him to live a long, healthy life.  He's in excellent physical shape - svelte, sleek, and lithe for peak superhero performance. 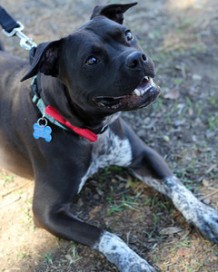 Most importantly, he is happy.  He is happy and he is 100% ready to find a home of his own.  Eeyore still has the worries every once in awhile.  He has some strange feelings about paper towels and cleaning products that we'll never really know the source of.  But he has transformed from an emaciated boy full of anxiety to a healthy, happy, superdog ready to move in and give someone a million reasons to smile.  Is that someone you?

Email [email protected] for more information or to set up a time to meet Eeyore!  You can also follow Eeyore and the other LFS dogs on Facebook!