Sometimes cats and kittens we rescue get adopted so quickly we barely even have a chance to get a photo or learn much about their personalities. Other times, it seems like their adoption day will simply never come. Here are some of our amazing long-stay cats at Austin Pets Alive! All have their own unique things to offer a forever home, and we hope that by telling their stories they can find one soon. We know that the perfect homes are out there, we just need to reach them.

Nevada is a quiet, easy-going beefcake kitty. He likes to be near people and also likes to sleep with them.  Naps are, after all, something he is very good at taking. Nevada likes to have his head scratched and to be petted, but not on his back – that spot is too sensitive for him. He also really loves to hang out and wrestle with his kitty pals. He’ll even let a female kitty give him a good grooming…wink, wink!

Nevada has a form of diabetes, called Diabetes Insipidus, which means that his body cannot store and recycle water normally. For treatment, he gets Vasopressin eye drops twice a day, which are very easy to administer. Nevada also needs to have constant access to a large bowl of water, or have several placed throughout the house. As you would imagine, drinking lots of water means that he urinates a lot, but we are glad to report that he always uses his litter box. Whew!

Nevada is also allergic to fleas and will need monthly flea treatment to keep his allergy to a minimum. That's a small favor for such a special boy. Austin Pets Alive! is prepared to provide all of Nevada’s medication at cost. 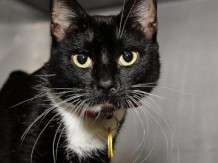 Oprah shiny and silky black coat is punctuated with her big golden eyes, her white chin & feet and her super-long white whiskers. Oprah's favorite pastimes include cuddling and being affectionate. She is easily held by her people, and she especially loves just laying around on your lap. She gets along well with people and dogs, but not so much with other cats because some have been mean to her before.

Oprah is FIV+, which means that she was probably attacked by another cat with FIV at some point before we met her. But don’t worry, it’s not contagious to humans or dogs, and can only be given to another cat through blood. We are happy to report that Oprah is a non-aggressive cat.  Her life expectancy is the same as other cats, and helping her have the longest life possible means a high quality diet. These can be found at any pet store and are typically grain and corn free.

Because we can never predict the actions of other uknown cats, it’s best that Oprah remain an indoor-only kitty when she finds her forever home.

Jersey is the quintessential chubby, lovable kitty! Jersey has experience around dogs and gets along great with them. He is very friendly and loves, loves, loves to be petted (his blue-grey fur is really soft, so it's a good trade). Sometimes he will nibble your hand or meow at you to tell you that he wants you to pet him MORE! Jersey is very laid-back and likes to be with people because that's where the action is! He would rather sit next to you or near you than in your lap, but he will make frequent visits to you for some loving. He is partial to head rubs and tummy rubs, which can make him very happy and a little frisky! He likes to play and always seems to be ready to paw around.

Jersey is positive for FeLV (Feline Leukemia Virus), which means he can only live with dogs, or with cats that are also FeLV positive. He must always remain an indoor kitty and eat a nutritionally balanced diet. He will also need regular vet care and if he ever shows signs of illness, it will be important for his family to take him to the vet immediately. Cats can live up to 4 or so years after receiving a diagnosis for FeLV. Because of his FeLV positive status, Jersey's adoption fee is $0.00, and all medical treatment he may need will be provided by APA!

Bluebell suddenly lost her family when she was abandoned at the Emergency Clinic with another kitty. Immediately, it was noted that she has an eye allergy. Over the past few months, APA! has been slowly going through the process of elimination to determine what exactly her allergy is, taking time between each treatment to note how she responds, and we are determined to get to the bottom of it! Even if adopted, APA! will continue to search for a diagnosis at no charge to her adopter.

Bluebell is affectionate and will easily head-butt your hands whenever you’re near. She is tolerant of other cats and would do best in a home without small children. She is a quiet gal, enjoys her long naps in whatever warm spots she can find, and has been a staff and volunteer favorite since we’ve known her.

If you or anyone you know is interested in learning more about adopting these kitties, please email [email protected].