Flash - Survived 40 ft. overpass fall and being hit by car 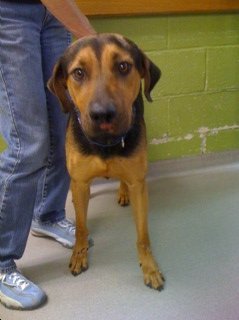 Update 12/2/10: Flash's broken pelvis is completely healed! But the vets at Animal Trustees of Austin have discovered that he has a torn ACL and will need surgery on that. We've had to add $2,000 to the total that we need to raise for him, as the pelvic surgery was also more than expected.

Update 10/21/10:  Flash's surgery was yesterday. The xrays showed a fractured pelvis in a few places.  One part was pretty bad and they had to shift stuff around and put a metal plate and bolts in. But surgery was successful and he's at his foster home recovering now.  Total recovery time is 6-8 weeks, with the first two weeks of very limited activity.  Right now, limiting activity is not a problem, he is hurting after surgery, doesn't want to walk and his angel foster has to carry him outside.  The surgeon expects that he'll make a full recovery. He's on a lot of pain medication right now and the foster has discovered that he particularly loves it with a little vanilla ice cream. The surgery cost more than we originally estimated, so we are raising his total costs to $1,300.

The dog in this photo fell off a 40 ft overpass and was then hit by a car. A witness called animal control, who brought him into Town Lake Animal Center.

Remarkably, he survived and can walk.

We pulled him from TLAC today and Dr. Jefferson evaluated him immediately.

The only issue she found is his back leg which is broken and he probably has a broken pelvis, which will require FHO surgery at ATA. He's very comfortable on pain meds and at a nice foster home right now and will be going in for x-rays first thing this week.

We've named him Flash and are looking for an adopter for him, so he can get into a permanent home and start bonding with his new family right away. If you're interested, send us an email at [email protected]

Thank you so much to all of our supporters who have donated for treatment for other dogs like Flash, like Teddy and Paco, and have enabled us to continue pulling adoptable pets who may need extra veterinary care. Fixing a broken leg and having FHO surgery is so treatable - we couldn't leave him behind to be euthanized after what he'd been though.

We are looking to raise $1,000 for Flash's treatment. Any funds we raise that we don't need for him we will use for the other 3 pets we've pulled recently who were also hit by cars, but individual treatments were not as expensive as the dogs about whom we've posted.

And a huge thanks to Flash's foster, who signed up today after reading Paco's story. If not for fosters, we could not save these pets. We are always in need of more. If you are interested, please apply through our website.