Maggie and the barker's dozen had a great week! Cricket is doing great and shows no signs of a limp or of any problems at all with the leg. Big head scratcher as to what had her limping in the first place. But we are very glad whatever it was is no longer a problem. Tinkerbell, the runt is really thriving! She loves eating puppy food but is still enjoying qt with momma when she gets to nurse without anyone else bothering her. The pups have officially outgrown the puppy pit and are now enjoying their own room next to mom's. Mom visits several times a day but Mom is really enjoying her time hanging out with her foster siblings. She is so playful and would really like to run and play fetch and tug for hours. But that girlish figure makes running a little awkward. She'll be glad to have this motherhood thing behind her and will be happy to be spayed as soon as she is ready.

A professional photographer friend of mine came by this week and did a photo shoot with the pups. They treated him a little like a celebrity treats the paparazzi and spent most of the time hiding in the bushes while he was here. But he was still able to get some great shots of them as you can see below. 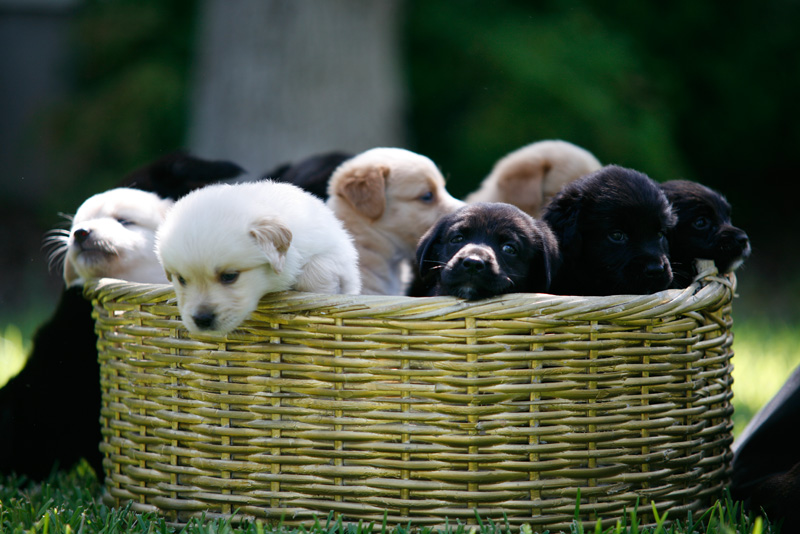 And today the pups had their first public appearance. The great folks at Tomlinson's Westlake location greated us for an adoption day with open arms. Actually they were arms full of donations. The pups now each come with a dowry of food and a membership to Tomlinson's food club. And the customers shopping there made mounds of donations as well. Thanks to everyone! We had a great crowd of folks coming by to play with the pups and at times had a crowd of people standing around an empty pen because all of the pups were being held. Our assitant, Conor, a friend's son, was Mr. Hand Sanitizer and made sure that everyone scrubbed up before touching the pups. A good time was definitely had by all and the pups are just worn out now. Sleeping like the babies they are.