Xena's first nine years were not what she expected. She spent her vulnerable puppy months and what should have been a happy and active adult life in someone’s backyard, lonely and often forgotten. The mange she'd developed stripped off much of her protective fur, probably making cold winter nights the hardest.

An Austin Pets Alive! volunteer saw something in her eyes, though -- something that, behind their frightened exterior told him that Xena so desperately wanted a connection with someone.

That someone turned out to be two someones: Ann and Christine Fowler.

The sisters had recently lost their beloved 16-year-old dog, leaving them heartbroken and wanting to help another aging senior. They explained to APA! staff they were looking for a "sweet old gal who needed a break."

While Xena was often overlooked due to her scarily skinny appearance with a mangey coat, volunteers introduced them and everything seemed to click.

"What we saw was a dog that needed a friend, a dog that was not likely to find a home quickly or easily ... an old gal who needed a break." 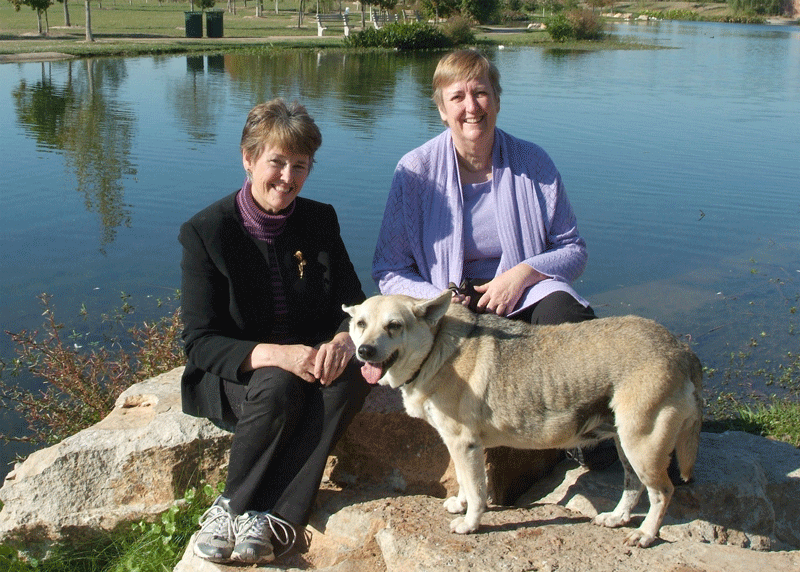 Ann and Christine renamed Xena "GiGi" or "GG", which is short for "Good Girl," hoping she would start to associate her name with something positive.

During the first few weeks GiGi wore a painfully shy, protective layer. If someone touched her unexpectedly, GiGi ran yelping into the next room, returning sheepishly a few minutes later. She ate all her meals quickly and ravenously, as if she was afraid it could be her last. When other dogs approached her she reacted fearfully and would growl when someone leaned in to pet her.

"She was letting me know she was not yet comfortable enough to allow me in her personal space," Ann said. "We did not punish her; we just gave her time to get used to her new environment and people."

Ann and Christine also wanted to learn how to best work with GiGi so took training classes through PetSmart and the Canine Center for Training and Behavior, which they said they have found invaluable.

"In December GiGi had a 'Helen Keller moment,'" Ann said. "I believe it finally occurred to her that the words we say have relevance to her. She now pays attention to words and reacts appropriately."

Not only that, but GiGi has gone from fearful and anxious to relaxed and content. In addition to welcoming other forms of affection and new experiences (like letting her ears flap in the wind during a long car ride!), GiGi has grown especially fond of massages.

"She will come to me when I’m sitting on the couch and burrow her head between my legs and the couch," Ann laughed. "She seems to like this 'bridge', because then I can massage her head and her back at the same time."

GiGi has made such great strides that Ann and Christine have even signed her up for a weekend of hiking with other dogs at the Canine Center.

"She has taken a liking to a Husky named Isaac Newton,"Ann said. "Watching her run up to him and frolic as she playfully bites him makes us laugh."

The Fowler sisters say that adopting GiGi has brought a joy back into their lives -- a joy only a dog can provide.

"There's probably not a day goes by that we don't watch her snoozing in the living room and remark how happy we are that she was given the opportunity to live happily ever after."