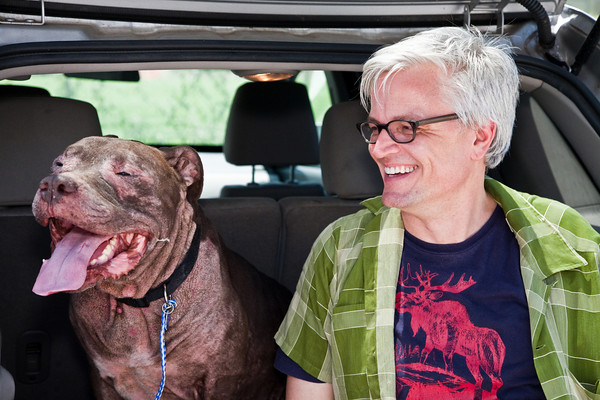 We've been heartbroken about this and hate to send out bad news as an announcement, but know that there are lots of people in our community who cared for Duke, who passed away due to congestive heart failure.

Duke was adopted by his foster mom and received all of his heartworm treatment and seemed to make a full recovery from all of his issues. He spent a lot of time with the foster's parents, out in the country, as he seemed to be getting more and more arthritic and her apartment stairs were hard for him. A month or so ago, they called and said that he had been in to see their vet and was suffering from congestive heart failure. Their vet tried many different medications to try to get his heart to last longer but he didn't make it.

We don't think it was a result of his heartworms. We think it was a genetic issue that his parents probably had too. The extra large breed dogs often don't live as long as regular sized dogs (Duke was about 8 years old).

The family was devastated by the loss and they even buried him in their yard (not an easy thing to do with that large of a dog).

The good news for Duke is that he got almost a year of living inside, eating good food, being parasite free, and being loved like a family member. He wouldn't have had that without the heroic efforts that so many people, especially Jay Hodges who first saw him at the shelter, made to save him. It seems like a short good life but we still think there is a lot of merit to letting a dog go out of this world when he is ready rather than just because there isn't a place for him.

The photo above is of Duke and Jay, right after we pulled Duke out of TLAC last year.  He'd been looking very depressed in his cage and was so happy to jump in Jay's car.

In case you missed it, here's the video we took of Duke with his hair grown in and looking handsome a few months ago before his foster mom officially adopted him: