History of No Kill in Austin: Part 5 - The Clinic, by Dr. Ellen Jefferson 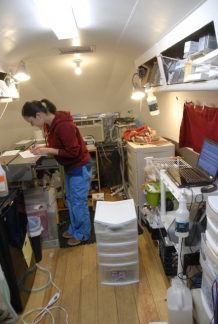 As we began pulling at-risk animals from the city shelter in 2008, one of the first things we realized we needed was a place to treat animals and perform spay/neuter surgeries. We initially used borrowed space at the Lake Austin Boulevard Animal Hospital, but that limited the days and times we could treat the animals. We also used area vets and Emancipet, but because we had to pay for those surgeries, and adapt to their schedules, we were still limited to approximately 100 surgeries per month.

We had no facility and a tiny budget, but we did have creativity. In 2009, taking our cue from the then-fledgling food truck industry, we found a beat up old Airstream trailer (purchased by a generous donor), borrowed space in front of Austin’s Pizza on South Lamar, and opened the first APA! Medical Clinic.

Foster parents would bring their animals to the trailer in the morning, and Jordana and Sara and I would get through as many as 50 sterilizations in a single day. It also enabled us to treat more varied conditions, because we had a place to keep our stuff.

It is amazing the dramatic impact having this ridiculously small facility made on our ability to save lives.

As APA! has grown, so has our medical clinic. In fact our clinic sees more than 7,000 animals in a given year, and costs about a 1/4 of our budget to run – even with the tons of donations we receive.

But some things haven’t changed: our commitment to provide lifesaving care to the best of our
abilities, even in cramped quarters, and to do everything possible to save as many lives as we can.