How I fell in love with Barley, and how YOU can too!

How I fell in love with Barley, and how YOU can too! 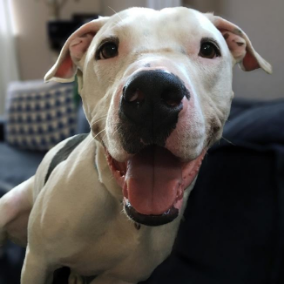 This is a true story about how a volunteer fell in love with a white, black-spotty dog named Barley and their adventures while he is waiting for his forever home.

The first time I met Barley I took him out to a play pen at APA! and when I sat down on a chair, he jumped up on the chair next to me and leaned over so I could pet his head. You could say, it was love at first scratch! As an avid runner I was thrilled when I found out that Barley is a member of the RuffTail Runners program, which means that Barley can be seen running around Lady Bird Lake on 3 mile runs twice a day – that’s a pretty athletic dog! I can’t run every day so sometimes I just walk around the trail with Barley and he is equally happy, especially if you let him explore the water every now and then. 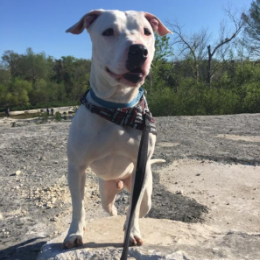 Our first off-site adventure was at McKinney Falls. Barley thoroughly enjoyed the car ride there, sitting on the passenger seat next to me with a big smile on his face looking out through the window at the world passing by. We spent the day hiking around McKinney Falls, splashing in the water puddles and soaking up the smells. Of course we took a break to enjoy a cheese and meat picnic complete with a puppy whip for dessert. Barley has excellent leash skills and it was a joy to take him out on the trails. His tail was held up high and his whole body wiggled as he explored the grounds. On our drive back Barley passed out in the back of my car, snoring softly. 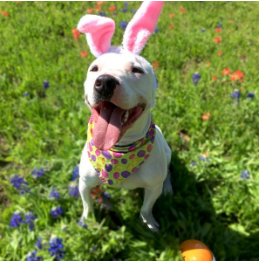 For Easter, APA! had a Cutest Bunny 2016 Contest and Barley was brave enough to dress as an adorable bunny for the competition. It was a close race and Barley won 2nd place, which we celebrated with some delicious Easter ham! With Barley’s black spots on his back, people have said that he would certainly have been the cutest doggie bunny-cow, we just need to find that competition!

Barley has stayed at my house for several sleepovers and he is a perfect house guest. He is potty- and crate-trained, doesn’t bark (the name Barley is a mystery since this is a very quiet boy). He is very affectionate and loves to stay close, if you allow him up on your bed or couch he will snuggle up right next to you. He is the perfect balance between an energetic dog that you can take out for a nice run and an affectionate dog that will curl up next to you and relax when you are home. As an extra bonus, Barley has some experience living with cats so there is potential for him to join a home with a cat buddy. If that isn’t enough, Barley already knows "sit", "down" and "shake." I taught him shake in about 10 minutes –very smart boy! 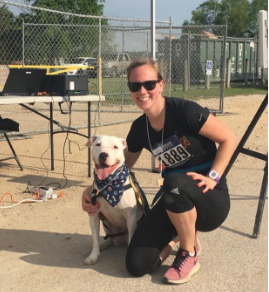 Since Barley is such an athletic dog I have had the pleasure to run two different 5K races with him. The first one was the UT Longhorn Run and the second was the Doggie Dash and Fun Walk where we finished 5th overall in the women’s group (don’t tell Barley he’s not a girl!). Barley is an excellent running buddy and has enjoyed participating in these races with me. Don’t tell anyone, but Barley definitely helped me improve my time for these races. He is a great motivation to get out and run!

I know the right person is out there for Barley, so with this post I hope we can spread the word about this amazing dog named Barley, he is ready for his next adventure, are you?