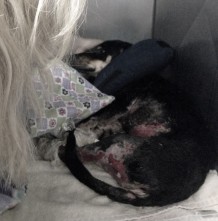 Your donation today can help save Jakey, a seven month old dachshund-mix who was severely burned in an unknown accident.

Jakey is currently being treated with IV pain medication, IV fluids, and antibiotics in the APA! medical clinic. His treatment will take months and thousands of dollars.

This year marks Austin's third anniversary as the largest No-Kill city in the nation - due in great part to APA!'s specialized programs and medical clinic. Jakey's best chance at life is at APA!. In most cities, he would have been euthanized immediately. But with enough time, resources, and love at APA!, he will likely make a full recovery and be ready for adoption in a few months.

You can help save sweet Jakey by making a donation today. Your donations help APA! rescue pets with urgent medical needs, like Jakey.