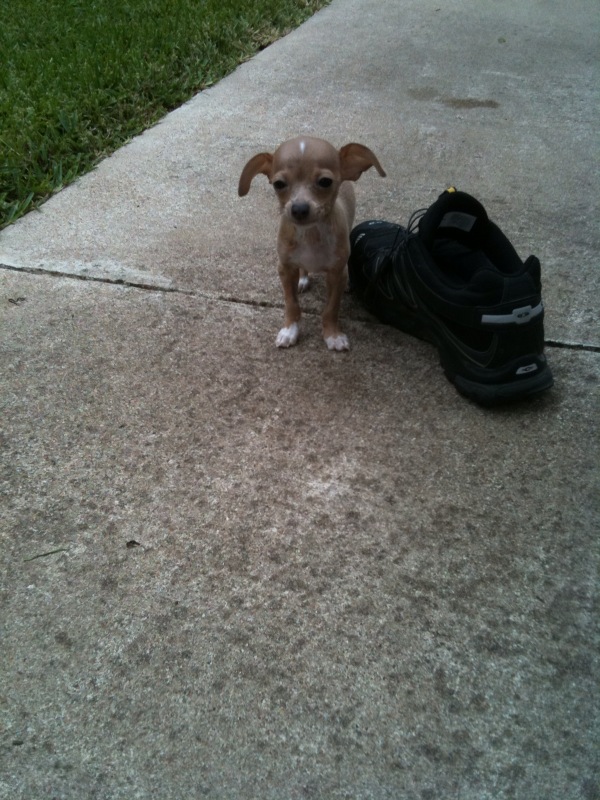 If we went into detail on Jonah's life so far, it wouldn't be pretty. He's such a cute little guy but for most of his life he's been very sick.

On Friday, September 10th, APA! pulled Jonah off the euth list at TLAC, they feared he had parvo since he wasn't keeping food down. However, he tested negative for parvo. During the next several days he lost an alarming amount of weight despite being force fed. He was skin and bones by the 16th. He wouldn't eat or keep down food. The next day Ellen did exploratory surgery and found it was intussusception.

The surgery went well but we had a terrible time getting him to come out of the anesthesia and couldn't maintain his body temp. Ellen had to take him in late that night so she could put him on an iv. We didn't think he would make it through the night. But he did! Jonah was being forced fed every 30 minutes during the day and every 2 hours through the night and was at the clinic everyday (Major props to his foster parents!).

The intussusception showed up again and Ellen operated again. This time, to prevent it from happening again, she sewed his intestines together in a serpentine shape. Genius! Within days he began to act like a normal puppy and was drinking and eating on his own. It's a miracle Jonah is alive, we often wondered if he would actually make it. But now Jonah is full of puppy kisses and cuddles. This little guy deserves a healthy, care-free life just as much as any other chi around. He knows it too, Jonah is so happy to be alive!

We are only able to help dogs and cats with special medical needs, like Jonah, because of our lovely donors and volunteers. Jonah required a lot of medical care, and APA! will need to raise $500 to cover costs for several surgeries and medication.

To donate toward Jonah's surgery, use our ChipIn . From a dog who's only known discomfort, Jonah is certainly thanking you in advance for starting his new life off with compassion and kindness!