Every month Austin Pets Alive! is honored to recognize one of our amazing volunteers as Volunteer of the Month. APA! is given this opportunity by Austin Woman Media, who features the articles online and in their monthly magazine. This ability to recognize our fantastic volunteer team members is also sponsored by Austin Subaru. 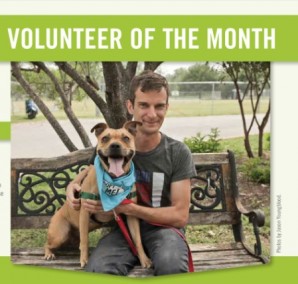 Thank you Michael for your contributions to APA!from walking dogs, to working with our behavior team dogs like Mustang Sally (who can be seen in action here), and helping to coordinate the annual American Pets Alive conference for the past three years. The coordination of the conferences is such a big part of how APA! teaches other shelters our processes, and how we learn from them, that Michael’s help is always needed. To see the full feature on michael, read the article here.

This is what some of the staff and fellow volunteers at APA! had to say about the time they have spent with Michael:

“Michael helps with a bunch of different programs. There isn’t much he can’t help with. He has been with the organization longer than most of us.”
- Alexandria Bonge, Assistant Dog Adoption Program Manager

“Michael is one of those volunteers that you see everywhere and wonder how he gets any sleep. He's at all of APA!'s special events. He's spending time with dogs, walking and loving them. He welcoming new volunteers to the APA! family. And he's working to make Internet and website magic happen so that we can show off all of our adoptable pets to Austin and the rest of the world. He's such an asset to this organization, and I'm personally glad to know him. Plus, he has a very cute dog!”
- Summer Huggins, APA! Volunteer

“Michael never stops! He's the ultimate problem-solver and has been a go-to guy at APA! for a long time. If he doesn't know how to do something that needs doing, he'll teach himself so that the job gets done.
The APA! staff and team leads aren't generally the most tech-savvy bunch, so Michael's knowledge there always makes things easier. Plus, he bakes delicious vegan goodies and shares them with everyone at TLAC :)
(His biggest contribution) is arguably planning the American Pets Alive conference. While other people pitch in and help, Michael really is the mastermind that makes the whole thing happen. Hundreds of people from communities around the US are able to benefit from his hard work.”
- Kristina Jakstas, Donor Relations Manager

“His work with the (American Pets Alive!) conference is huge, he helps animal rescue on a national level. Also, he is a killer cook! He makes a mean vegan cheesecake.”
- Lindsay Henderson, Dog Adoption Program Manager

Thank you again Michael for all of your hard work. You have earned your recognition and feature in Austin Woman! Each and every day, year in and year out, everyone at APA! appreciates you, your work, and your love for the animals!