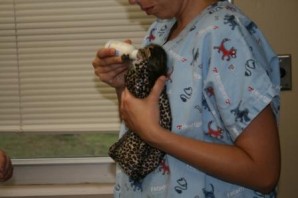 A big part of Austin maintaining a 90%+ live outcome rate this summer is due to the people who work in our bottle baby program. While dog intake at the Austin Animal Center is almost steady throughout the year, in the spring and summer, feral cats breed and kittens flood the shelter, causing cat intake to spike in these months.

With the milder temperatures and rain, a lot more kittens have been coming into the area shelters this year. APA has already rescued 50% more underage kittens (under 6 weeks old) than last year, which was a record-low year for kitten intake. Happily, though, the numbers are still lower than in years prior to 2011.

So far, we've rescued about 1,500 kittens and are still in the height of kitten season, although we're hopefully in the home stretch. We still desperately need fosters and help with bottle feeding kittens in the nursery! Check out our training schedule if interested!

By far, the largest demographic of animals we rescue who do not make it are underage kittens. About 400 kittens that we've rescued have died, which comes to about a 28% mortality rate.

In nature under good conditions when the kittens are with their mother and the mother is healthy, the mortality rate of kittens is about 20%.  Of course, the kittens we get from area shelters are usually sick and are without their mothers and must be bottle-fed.

Normally, the largest killer of kittens is fading kitten syndrome, whose symptoms are lethargy and meowing and reason is unknown. Kittens are treated by warming them and giving them glucose to raise their blood sugar, but often these kittens will still die, with the best of treatment. Some estimate that 20-40% of bottle babies will die from fading kitten syndrome.

This year, however, we've seen a lot of the panleukopenia virus in kittens from AAC, and we've lost about 35% of the kittens who contracted (or tested positive for) this virus.

Panleukopenia is a lot like the parvo virus we see in puppies.  In fact, we use the same test for both. And with both, we only get a positive test result when the animal has active symptoms.  If an animal has been exposed, but is not showing symptoms yet, the test will be negative. And just like the parvo virus, vaccinations prevent the disease.

Our volunteers created a special ward at our building to house kittens who test positive or were exposed to (ie, if the littermates have tested positive, but one kitten hasn't tested positive, we cannot risk the health of the unexposed kittens, so the whole litter will go together to the ward where they will all be treated) the panleukopenia virus. We do not euthanize immediately if a cat tests positive for panleukopenia because we've seen a lot of cases of false positives after vaccination.

Part of the treatment of panleukopenia is the medication, Cerenia, which prevents vomiting. We can always use donations to purchase more of this live-saving medication. 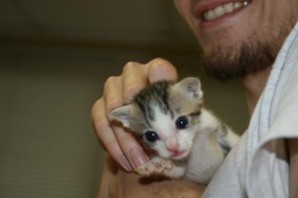 While we grieve for each and every kitten who does not make it, we celebrate the 1,100 kittens who did make it and would have died at the city shelter if we hadn't tried to save their lives. Watching a tiny baby grow up, get adopted, and become a beloved pet makes it all worth it.