Lebowski - The Little Chihuahua Who Could 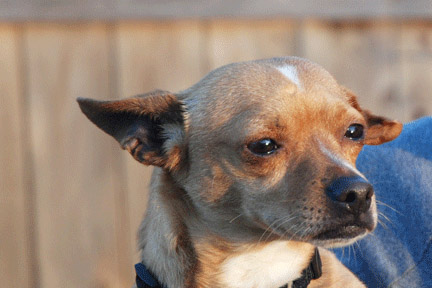 Lebowski has a herniated disc which has constricted use of his back legs. He has adapted by using his front legs and upper body to pull himself around, which is how he follows his foster family everywhere (although he's equally happy being carried).  Where there's a will, there's a way.

Lebowski's "adjustment" that allows him to get around has created a strong muscular upper body. His hind legs by comparison are much smaller. It seems as if he has lived with this condition for a while. He also has a few minor abrasions and some calluses on his legs from pulling his hind legs. To see Lebowski in action puts a smile on your face.

Lebowski is not in extreme pain, but does yelp on occasion and is on pain medication.

He gets along great with both the dog and cat in his foster home and is neither snappy nor fearful.

He went in for surgery today at Animal Trustees of Austin. He will have a Myelogram prior to surgery to pinpoint the problem disc. Once this information is gathered he will have surgery on the disc.

His post-care will require 4-6 weeks in a crate under strict confinement, which will be tough because he's young and energetic.

He will also be checked for pain daily. If he can feel pain in his feet after surgery, he has approximately a 50% chance of recovery. Each day he feels pain after that, his odds of recovery and use of his hind legs continue to rise.

Lebowski's medical costs including the Myelogram and surgery will cost $1,000.   We are raising funds to cover the cost of his care. His chances of recovery are too good to not try to help him.