[caption id="attachment_16103" align="alignleft" width="218" caption="Lilly says thanks to everyone who saved her life."] 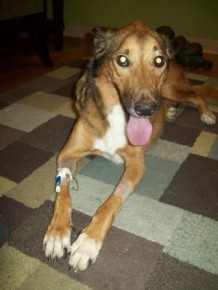 We're happy to announce that Lilly and Lady have both gone home and are doing well.  Thank you to everyone who donated to save their lives!  Below is a letter from their mom, Tracy:


The day before Labor Day, David and I happened to be in Austin with our daughter, visiting Gramma and Uncle Larry (my brother). Early in the afternoon, we got a call from his daughter saying that they were evacuating, there were literally flames on his brother’s front lawn. His family was able to grab one cat, and one dog - our Border Collie, Bash.

We jumped in the truck, and headed to Hwy 71. Once we hit Bastrop, there was chaos, smoke, highway closures, etc. David and I have an RV parked in the Bastrop River RV Park, so we headed there. We stayed the night there not knowing anything - not even if his family was safe. He was able to get his parents on the phone later that night and found out that the humans were safe, and that one cat and one dog were with them in Smithville. His parents let us know that no one had come to let them know that there was an emergency, and that they needed to leave - there was no warning at all. They left their homes when they saw flames. Because there was no time to do much of anything, all they could do was get themselves to their vehicles, and on the way, open the fences for the donkey and the other dogs.

At that time we didn’t know anything about the state of the properties, the conditions of the roads, the status of the animals - nothing, very frustrating. We were getting conflicting stories on just about everything - whether or not a certain bldg. burnt, if the highway was accessible, that kind of stuff. Monday through Wednesday were very hard days filled with misinformation, conflicting details, personal duties (picking up scripts for medications left behind, finding clothes to wear, connecting with the Red Cross and other resources, etc.), contacting other family members, AND finding about our lost girls, Lady, Lilly, and Angel.

By Thurs we had received word that Lady and Lilly may be at Austin Humane Society, and that there were pics online. Without looking at the pics on their site, I got in the car, got over there, and happily confirmed that they were our lost girls. Talking with the staff over there, I confirmed that there were 3 dogs running together but the animal control people were only able to get 2.

The staff at AHS were so compassionate and understanding, they made sure we walked out of there with food, bowls, blankets - anything needed so that all we had to do was go home and love our girls. Our first night home was wonderful, but tense as we knew something was wrong. We thought that the dogs were stressed beyond their limits, and that they were just trying to acclimate to being home. Lilly had a glazed look to her eyes, was burned in various places, having obvious trouble breathing, very lethargic. Lady, although more “with it”, was coughing a lot, struggling to breathe (as well), shaky on her feet, and burned as well. Very scary...

We took Lady to the mobile clinic in Bastrop for wound care, took Lilly to the APA set-up in front of the Bastrop Police station, and heard that both dogs were in need of way more extensive med care. Their symptoms were serious and HAD to be addressed immediately. Through Austin Pets Alive, we were able to access care and resources that we never knew were available. APA set us up with the Heart of Texas Veterinary Specialty Hospital who saved Lilly and Lady's lives.

Since being released, Lady has been doing well - Lilly has had a few more bumps [in the road], but is now doing well. She has had some outside time with the ball, she has barked - rather happily I believe :D, and is taking in water pretty well. Still kinda finicky with the food, but she does seem hungry - so, we leave her food down so she can get to it at any time.

Please tell EVERYONE who helped us with the expenses "Thank You" from the bottom of our hearts, we could have never done this alone. We are overwhelmed by strangers helping us, in this awful time when it feels like everything is against us, strangers from all over came, and for no reason opened their pockets and gave money to people they don't know. My dogs are alive because of you and you deserve more credit than you know. Thank you, thank you, thank you!

We still have a dog that's missing, “Angel” is her name and she is the mother of Lilly.  She was running with Lady and Lilly and was seen alive with the other two dogs but she did not get captured. She is a Shepherd/collie mix and she’s short and stocky with coarse hair that's brown, black and white. She is about 7 years old and fixed. I check the shelter web site every day still praying that she shows up...we sure do miss her.

While we are so thankful that both of these lives were saved, Lilly unfortunately ended up staying at the vet a lot longer than anyone had anticipated. The total vet costs for these two ended up at $6,000, even with a big discount from the Heart of Texas Veterinary Specialty Center.  Westlake Animal Hospital raised $1,500 for their care, so our bill is $4,500. So far, we have raised $3,500 and we are hoping our supporters will donate an additional $1,000 so that we can pay their bill.

Also, as we have learned throughout the horrific events of the past month, these fires pop up so quickly. Many people were running for their lives and others weren't even home when the evacuations happened and were not allowed back in for their pets. Because Central Texas is still so dry, we hope that Tracy's story will inspire people to think about evacuation plans for their pets should we get another fire.

Finally, pets from the Bastrop fires who are being held at the Bastrop Animal Shelter and Austin Humane Society have gone up for adoption starting yesterday. If you know of anyone still looking for their pets, please have them check these two facilities! The Lost and Found Pets from Texas Wildfires Facebook page and Wildfire Pet Rescue website have been compiling and reporting on all pets lost/found in the fires that may be at other locations like individuals' homes or vet clinics, and are other great resources to check.