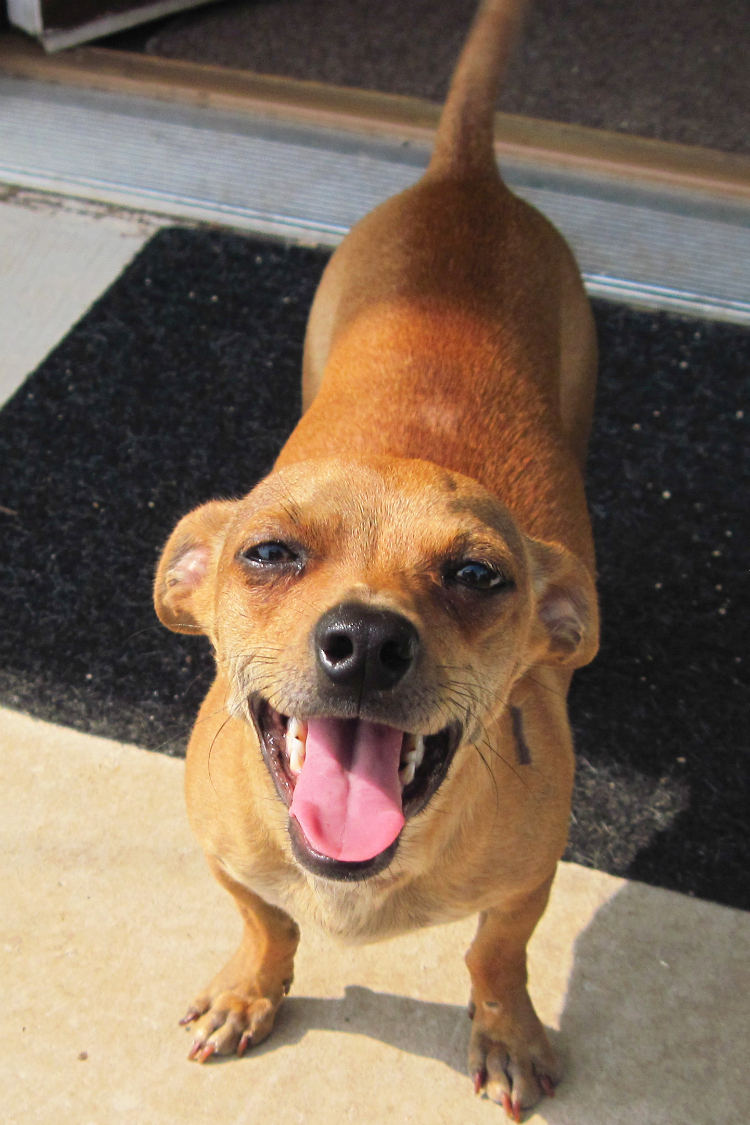 Since the Big Brother/Sister Program started at Austin Pets Alive! a few months ago, the bonds between "little" dogs and their "big" siblings have been mutually beneficial. We as volunteers love them, bring them special treats, and then cheer for them with incredible pride when their forever families find and adopt them.

But one "little," a chihuahua named Eddie, had no plans of going anywhere else once he spent the night at big sister Claudia Alarcón's house. We visited with Claudia recently to learn the full story:

How long have you been involved as an APA! volunteer?
Claudia: I have been an APA! volunteer for a little over a year. I started as a foster parent for a few doggies, then got more involved when the Big Brothers/Sisters Program started. I am one of the program's Hosts -- our job is to check in with other volunteers to answer questions, facilitate interaction between siblings, and organize fun events for our dogs and volunteers. I also help with the dog-pricing team.

What made you decide to participate in the Big Brothers/Sister program when it started?
Claudia:It seemed like a good opportunity to help dogs without committing to fostering. My schedule is flexible so I thought I could spend more time volunteering, which is something I really wanted to do anyway, and it's a very easy thing to do.

Was Eddie your first "little"?
Claudia: No. I think my first was Rosie, a sweet 7-year-old chihuahua. I had some littles who I never got to meet because they were adopted so fast! I also had Booker, a super cute old doggy, and Dora, a beautiful blue-gray chihuahua. I specialize in tiny dogs. When Dora was adopted they gave me a choice of two littles, and when I saw Eddie's photo, looking so frail and scared, I knew he was the one. He had been brought to TLAC as a stray, and he was very sick with parvo, but the awesome staff at APA! was able to save him.

What kinds of things did you do for him as your "little"?
Claudia: At first I just visited him at the APA! building, where he was hanging out while fully recovering. He was skin and bones, very shy and scared, so we went on little walks and I snuggled him, brought him treats, and bought him a cute new sweater. Eventually he started going to adoption sites so I couldn't see him very often, so one day I brought him home for a sleepover and a bath, and he got along very well with my dogs. One of the things we do as big siblings is observe their health and behavior, and I noticed Eddie was not gaining much weight and was very scared at the APA! building, so I started bringing him home for sleepovers and driving him to adoption sites the next day. 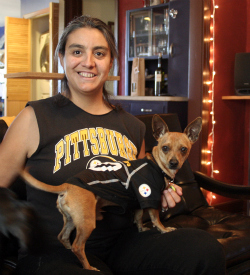 When did you decide that you wanted to adopt him and be more than his big sister?
Claudia: At our home he was eating very well and was very happy playing with our dogs. The week it got very cold -- it's when it snowed in February -- and adoption sites were closed, he became my full-time foster. A potential adopter came over for a meet-and-greet and agreed to adopt Eddie and filled out the paperwork, but failed to show up to finalize the adoption -- twice. After the second time, I refused to let him go. My husband and I loved him, and he was just so great with our dogs, it was a perfect fit. It's like he picked me, from the very beginning, when I saw his photo, you know?

How is he doing in your family these days?
Claudia: Fantastic! He really was meant to be part of our family. He brings a great balance to our dogs, Rosie, who is too bossy, and Benji, my previous APA! adopted doggy, who is too shy. Eddie is the happiest dog I have ever met, always ready to play. I have said before that if we could harness the power of his tail wag, we could provide energy to the entire City of Austin. He loves to snuggle, chase grackles from my garden, and play with his toys and siblings. He is so full of love in such a tiny package, he brightens our day every day and I am so glad that we gave him a home!

What would you say to someone is considering volunteering with APA! and the Big Brothers/Sisters Program?
Claudia: I would say it's one of the most rewarding things I have ever done. To know that even 15 minutes of your time make a difference in how a dog feels, looks or acts is amazing. Some of these poor guys have been abandoned, abused, left for dead; some never have felt love or human touch. Anything you can do to make their stay at APA! more comfortable is great, and it helps them become more adoptable. I can't recommend this program enough. Being an APA! volunteer has changed my life.