Austin Pets Alive! is an organization dedicated to working miracles for dogs and cats in the Austin area. When it seems all of their chances have run out, APA! steps in to care for them until their forever family is found, no matter how long it takes. 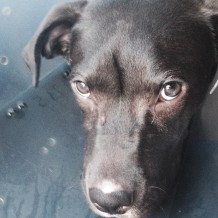 One of these amazing animals is a dog named Loki. He is an excellent example of how a past filled with abuse and abandonment can turn into a happy ending and a life filled with love.

This adorable black puppy was found sick, starving to death and injured before he came to APA! Suffering from parvo and slightly crippled due to a poorly healed broken leg, he was in desperate need of a second chance. The APA! staff began his treatment for parvo. During his recuperation, one of the many kindhearted volunteers found him through the volunteer Facebook group and offered to foster him through his recovery.

Having already fostered one dog through APA! she knew firsthand how easy it was to get attached to a foster pet and the mixed emotions when they find their forever home. Yet she stepped right up again to provide a loving home for him until he found his permanent home. On July 29th Loki went home with his foster family.

He quickly settled in as a member of the family. He had an awkward habit of peeing when he got excited. His foster mom jokingly told her friends that if he didn’t pee on you, it meant he didn’t like you! Despite his quirks, his foster family loved him. They gave him supplements to help his leg and took him on long walks. He loved to run and play and once he was worn out he’d fall asleep, often in the most awkward positions. With his foster family’s help and a protective big sister in Dixie, he became a very sociable and friendly dog. 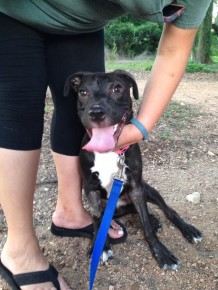 After spotting him on APA!s website, his new adoptive parents were attracted by his size and demeanor and fell in love after reading about his story and what he had been through. They arranged to meet him and he was so happy at the idea of having a forever home that he couldn’t stop wiggling. They introduced him to their existing dog and when it was determined they were a good fit the deal was sealed. On August 15th Loki was given a name (Port) and finally went home with his forever family!

Port is now a happy, energetic, fun loving dog living with his adoptive parents and his new furry big sister, Piper. They love to run and play together for hours. When they’re done, they’ll flop on the bed with their tongues hanging out and tails wagging madly, making their parents laugh. Port loves to enjoy a good kong filled with peanut butter and even eats fish oil capsules like treats! His favorite things to do are ride in the car, go swimming, go for trail walks with his family, and play with his furry sister until they’re both totally exhausted. He still likes to sleep in all kinds of funny positions too.

Port is lucky that his foster family and foster big sister live not too far away. Both sets of his parents exchange pictures and recently when he saw his foster family during a walk around the neighborhood he got very excited and definitely remembered Dixie! 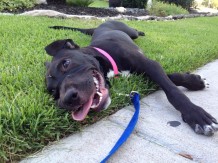 Port’s family says that he and his sist  er have changed their life in profound ways. They say that having pets has made them overall more happy and positive about life. With the help of APA!, and the love and care of his loving foster parents and protective furry foster sister, Port went from being on the edge of starvation and death to a happy, healthy dog with a full life ahead of him.

Every animal has a story and deserves a loving home. Port’s happy ending is just one of many that APA! creates every day.