In August 2015, Lola, a shar-pei blend, found herself at our city’s Austin Animal Center (AAC). Her owner was there to drop her off. Lola was 10 years old and had lived since a puppy in her home. We will never know why her owner broke their bond, and we work very hard not to judge people we do not know. But what we do know is that Lola lived for 10 years inside a house, sleeping on the couch most of the time, and being loved. And then she found herself in the shelter with no home, no couch, no family. 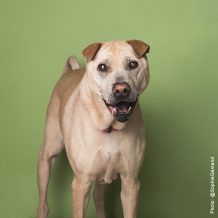 The shock to her system was very hard. Lola developed sores on her feet from standing on a hard kennel floor. She developed diarrhea from the stress; and she began nipping at people who tried to handle her leash. She was losing weight, not getting adoption interest due to the smell from her nonstop diarrhea, and she bounced from foster to foster and back to the shelter multiple times as AAC tried to find a better solution than a kennel for her. The medical effects of her stress began to spiral. She waited day after day, searching the faces of passers-by for her owner, thinking “surely they are coming back for me.” But her spirit was sinking along with her weight.

AAC then labeled her ATTENTION. This means that a dog or cat has a medical or behavioral condition that AAC is not equipped to handle. They ask APA! to take the animals on this list, or they may have to consider euthanasia. APA! has had experience with all sorts of problems like this and in February 2016 pulled Lola into our care.

Lola’s saga didn't stop there. Instead of getting better, despite many treatments for parasites, inflammatory bowel, vitamin deficiencies, and allergies, she continued to have incessant diarrhea. We don't know why she wasn’t improving, but on top of her illness she had to be marked as a "caution" dog because she had continued snapping when strangers touched her collar.

Lola’s bodily manifestations of despair were real and only prolonged her stay outside a home. No one was going to adopt her in this state. Luckily, many APA! volunteers took her under their wing, giving her daily attention and trying to help her make the best of it. They truly saved her life by giving her hope.

No dogs or cats should have to enter a shelter after spending the majority of their lives in a home. It truly is a shock to the system, and Lola's physical effects are merely more obvious than most. For the last 7 years, APA! has focused on making sure these seniors are given a chance at life. This is much more than most can expect to receive in traditional shelters, where they are often culled out through euthanasia. APA! is bringing in more senior cats and dogs now as our programs have developed.

The next phase of our No Kill journey is to not only ensure that older pets will not die simply because they are turned into a shelter in their twilight years, but that they are given care tailored to their special needs. Seniors tend to have more health issues, and our medical approach for them has to be different. We are currently developing our resources to meet the needs of senior pets. We are creating a fund that allows us to do basic health diagnostics we only do in special cases for younger pets. This will mean having a fund ready to use for the 375 seniors we expect to see each year – to start off early, heading off any chronic medical problems. Typically, we currently do such testing on younger pets only after launching a fundraiser to cover these non-routine costs.

Our new Senior Pets Fund will allow us to be ready to accept senior cats and dogs and do diagnostics the day one arrives at APA!. It will allow us to do x-rays, blood-work, urinalysis, or dentals without having to wait for funds to arrive. It will allow our veterinarians to spend a little more time than usual on this special class of pets. For pets like Lola, that gives them a head start, so that conditions don't become chronic, and raises their chances of being adopted and finding themselves back in a home, resting on a comfortable couch, sooner.

Lola has a foster now who is working with her on her health and behavior, and she is improving. She has more good days than bad and is visibly relaxing. Lola is an extreme case of a senior pet left in a shelter to possibly die. But she has a new lease on life now, and soon this will be a distant memory. We hope the same for all seniors. Please help by donating to our new Senior Pets Fund.