Austin Pets Alive! (APA!) is hosting a community event designed to educate the general public on a fungus known as ringworm on Saturday, August 16th from noon to 6pm at their Town Lake Animal Center location (and hopefully encourage many adoptions in the process!). 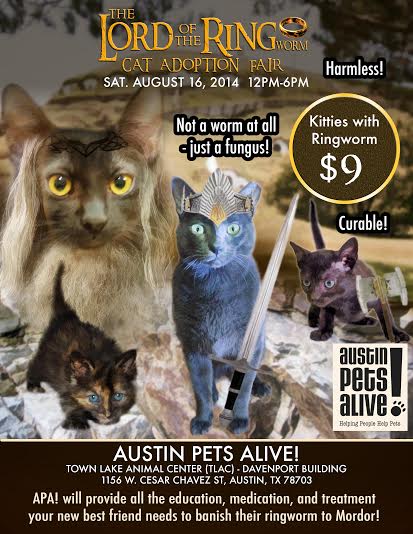 APA! has saved more than 500 cats with ringworm from euthanasia since the inception of Dazey's Ward in 2010. Ringworm is highly treatable (though fairly contagious) and generally not a serious condition. In spite of this, cats and kittens with ringworm are routinely euthanized in city shelters nationwide.

Join us on Saturday, August 16th to meet some of our Ringworm survivors and find out more about this silly fungus (that's not a worm at all...) and maybe find your forever companion!