Lucky the Poodle has a lucky ending

Lucky is a 2-year old poodle mix that came to APA! through our PASS Program (Positive Alternative to Shelter Surrender). Lucky had been found at a construction site where he was fed scraps by the men working there until one worker became concerned and contacted us to help. Walking gingerly on his front 2-legs only, this worker took Lucky in and contacted APA!. Lucky needed to have surgery done on both of his rear knees to be able to walk on all four of legs. Lucky spent two months in a foster home where he got to heal, play, and learn to walk again.

"I will never forget what APA! has done for him," said Lucky's foster mom Victoria Campost. "The next dog I plan on getting I will be adopting from APA!. I admire everyone who works & volunteers to help the animals there. Y’all helped make his surgery possible and he is in an awesome new home. I miss him a lot and cried like a baby when he left, but he’s being showered with attention from his adopted family." 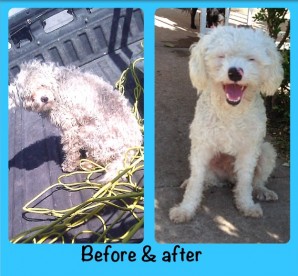 Lucky has come a long way but he, like always, is a happy dog that is loving life. "She (Lucky's new mom) has been keeping in touch with me with emails, has sent me a picture, and eventually we hope to meet up again. My other small dogs miss him as well. When they heard one of the video clips they heard me call his name and their ears perked up. Thanks again for everything y’all did for Lucky and all the other animals at the shelter."

Thank you Victoria for fostering Lucky!! Thank you for supporting, loving, & helping him during a hard time.Without fosters like Victoria many pets at APA! would not have the happy ending that Lucky is now enjoying!