December 1, 2015 (Austin, TX)­​ Austin Pets Alive! announced today that Neville the dog has a new forever home! Neville, who was ordered killed after a bite incident at Austin Pets Alive!, was later saved by a huge social media campaign and legal intervention. 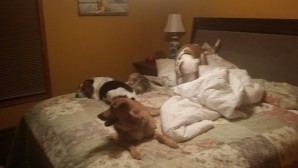 Neville with his new fur siblings.[/caption]

In addition to his human family, he has dog and cat siblings, with whom he has already bonded.

“We had a number of qualified adopters who were able to meet the criteria set forth by the court.” said Ellen Jefferson, APA! Executive Director, “In the end, we chose a family that fit every criteria that Neville needed for a good life. We believe he will be happiest in this home for the rest of his life." 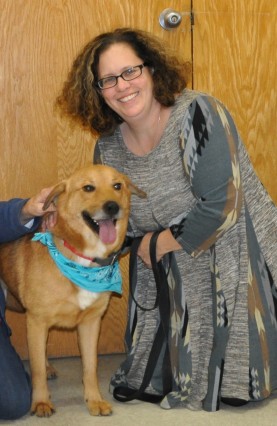 Neville with his new mom.[/caption]

"As a volunteer who interacted with Neville many times over several weeks, I knew he was a sweet, playful dog. I was devastated when he was ordered to be destroyed, and then thrilled to see all of the people stand up in support of him." said Vicki Evans, "He's a good dog and we are all very happy to see him saved and in a new home."

APA’s dog matchmaker team followed up with other qualified adopters to suggest other dogs in need of homes, in the hope that Neville will help these dogs too.

APA will be featuring Neville’s story, and stories like Neville’s, on its social media channels throughout Giving Tuesday, a national campaign to drive charitable donations after Black Friday and Cyber Monday.

Austin Pets Alive! relies solely on the community’s support for dogs and cats like Neville who are worth saving and deserve a second chance. Donations allow Austin Pets Alive! to continue helping the animals in need of saving and to eliminate the killing of companion animals in and around Austin: www.austinpetsalive.org/giving­tuesday