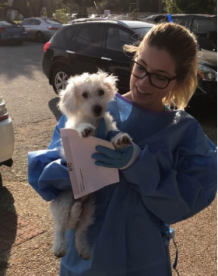 “APA! is the first organization in the country that began regularly treating puppies with parvovirus,” said Dr. Ellen Jefferson, Executive Director. “In the beginning, I treated them myself in my own home, and as APA! grew, we were able to take in more of these puppies each year. Now, our parvo treatment program is based at our shelter and has given a second chance at life to more than 3,000 puppies and dogs.”

Parvovirus (parvo) is highly contagious and attacks the intestinal tract of puppies, causing vomiting and diarrhea, which lead to malnourishment and dehydration. Parvo, if left untreated, is almost always fatal. In many traditional shelters, a parvo diagnosis is an immediate death sentence, because of its highly contagious nature and the intensive care needed to treat it. APA! has found low-cost ways to treat puppies with parvo by using volunteers supervised by the veterinarians at APA! to keep the puppies hydrated, fed, medicated and clean.

“It took about a week for us to feel fairly confident that Jackpot would pull through,” said Dr. Alexis Bardzinski, APA!’s lead veterinarian. “He had low protein and needed IV fluids, medications and had to be fed three times per day. Finally, on Halloween, he started wagging his tail for us.”

Jackpot now has a clean bill of health and will be available for adoption. There will be a photo opportunity of him being released from the parvo ward on November 10, 2016.