UPDATE-  Rosie (now Bella) got a great new home!   Congrats Rosie/ Bella... we will miss you!  Check back later for pics with her new mom! 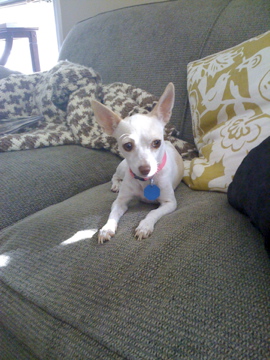 She came to my house from TLAC on Sunday, 9/28.  She was very scared and timid, and she would not come out of the crate when we got home.  I left the door open for her and before I knew it she was up on my sofa as if she'd lived here for years!  She settled in pretty well.  She remained a bit nervous for the first 24 hours, but she was sweet.

When I came home from work on Monday after noon, she came gleefully out of her crate and from that point forward she was running the house.  My two cats were less than thrilled with her presence, but they grew used to her.  She began following me around the house, licking me, demanding attention and even rolling over on her back for belly rubs.

She was so happy by Monday night, she did not want to sleep in her crate.  After several hours of her whining, I let her sleep on my bed around 3 a.m. and I didn't hear a peep out of her for four hours! Needless to say, on Tuesday night and Wednesday night I just had her on the bed when I went to bed and she slept there for 7 hours each night.  She curled into a tight little ball and slammed herself up against me. 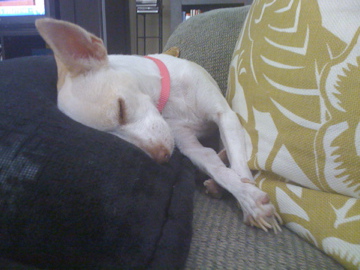 Today I took her to Emancipet for spaying, nail trimming, and a host of other "spa treatments" that I'm sure she was less than thrilled about receiving.  She will soon be going to an offsite adoption and I suspect she will go quickly.  What a turnaround from the timid, terrified little dog I picked up five days ago!  (AND, this was my first real foster experience - I will definitely foster again!!!