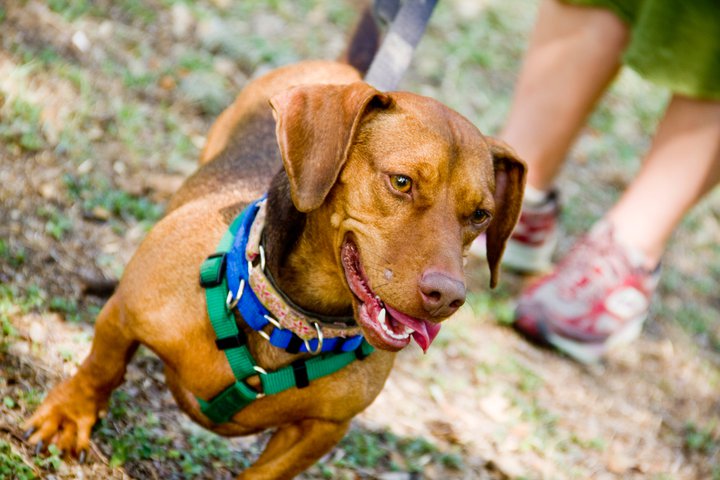 Slaaaaankadooooo!!!  Call that name out from across the yard and an adorable, sausage shaped dog will come sprinting at you.  Ears flopping, huge smile on her face, eyes lit up at the excitement of seeing her person.  You can also call out Slinky, Slank, Slinkers, Slink, Slanken, Slankadoon...you get the idea...all with the same awesome result.

I love this little dog.  I'm not generally a little dog person so maybe it has something to do with the fact that Slank is the world's largest doxie at about 20ish lbs.  Or maybe it's the fact that this dog is hilarious and wonderful and, to use the politically correct vernacular for the dogs in our behavior program, "needs a little something extra." 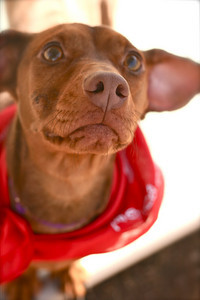 It's true, folks.  Slanken gets little bouts of the naughties.  It's also true that, just like the other dogs in our behavior program, it's not her fault AND she's capable of overcoming those naughties with a little help from her friends.  Slinky was adopted from TLAC as a young doglet by a family who named her Acid.  Maybe I shouldn't judge based on a name.  I mean, I've got a dog named Monkey.  But it's also clear that Slinky received virtually no socialization, training, or boundaries of any kind before she was returned to the shelter a few years later by the same family without  a single manner in sight.

In a nutshell, our sweet little sausage was clueless as to how she should interact with people and other dogs.  She's getting better though.  As soon as she learns an appropriate way to get positive attention or rewards, she does it with super excited enthusiasm.  She sits.  She comes.  She targets.  She snuggles nicely (where she used to jump at your face or divebomb your lap).  She is a fast and eager learner, a perpetual clown, and one of the coolest dogs I've ever been lucky enough to know. 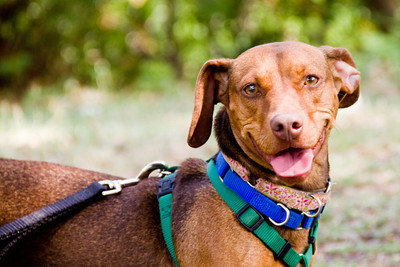 To be candid about Slink's behavior bits, she is the first dog who made me fully comprehend that growling or snapping does not mean a dog wants to hurt you.  Not just the way you know intellectually why a behavior is happening but in the much more important way of  understanding it in your heart.  It's a different way of  "getting it" that removes any fear or reactionary response on your end and lets you really see the dog in front of you and better grasp what is happening in that sticky moment.

Maybe that sounds weird to some of you, but it's the moments where Slink was at her worst that I feel like I really got to understand where she's coming from.  Imagine if you were never given any indication of what's okay and what's not.  Or if you never learned what people's (or other dogs, for that matter) actions towards you meant.

You can't learn how to respond appropriately or feel secure in the world living in a social vacuum but it doesn't mean you don't still desperately want positive interaction.  Plus, maybe you are a tenacious, spunky little doxie by breed and you'll always have a bit of firecracker style flair.  That part we'd never want to change.  :-) 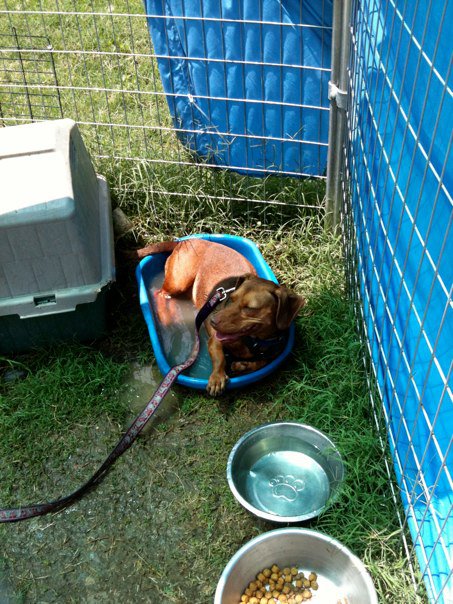 Whatever her challenges, they are absolutely nothing compared to everything that makes Slinky the adorable, cuddly, hilarious little clown so many of us love so much.  Slinky LOVES the water and will swim around in the big dogs' splash pool in goofy little circles with her mouth wide open (prompting more than one shark joke).  She will stick her entire face under to retrieve a tennis ball or a frisbee.  As you can see, she also looks ridiculously cute lounging in her personal water tub...aka The Weenie 'Cuzzi.

Slinky also loves to snuggle.  Wanting that time with her person is one of the things that has most helped her learn to just relax.  I think it also helps her learn to trust and feel safe.  This smart little nugget is also housetrained and does wonderfully hanging out in a home environment. 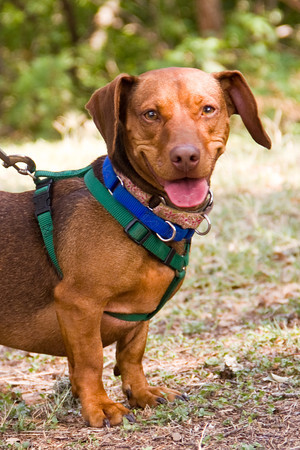 Slankadoo is looking for an adopter who loves her for the amazing little (or medium) goof that she is and can have a sense of humor and a big dose of empathy about her behavior quirks.  She will come with a training scholarship and a standing offer from the author to be at the adopter's beck & call if at all needed or wanted.  I believe in this silly weenie girl with all my heart and just want to see her go to a home that loves her for her awesomeness and is excited to help her meet all of her sausage-y potential.


Email [email protected] for more info or to meet The Slink in person!