Really, any kitten that is bottle fed is a miracle. We often don't know much history of the kittens we care for, but each and every kitten is special and each one's best life begins when they arrive in our Nursery. When born and raised in nature, it's been reported that survival rate of kittens is 70-80 percent. In our Nursery, we have a survival rate around 88-90 percent. Some of these kittens have defied so many odds that they are our Miracle Babies, and we'd like you to meet them. 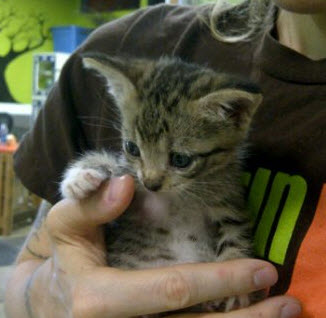 This tiny baby kitten was found crying all by himself in someone's yard on April 19th. The good samaritan who found him took him to the Emergency Animal Hospital in NW Austin. There, they estimated him to be just hours old. Moby's body temperature was very low (kittens cannot regulate their own temperatures) so while there, he was placed on heat and bottle fed into the early morning hours. Moby had what appeared to be a sore at the inner corner of his left eye, and a thick bed of fly larvae were found all over the back of his head. In fact, upon closer inspection, the "sore" in the corner of his eye is where the fly larvae had begun burrowing. This area was actively bleeding. The emergency clinic shaved Moby's head to remove as many of the larvae as possible, and when Town Lake Animal Center opened, he was transfered there. Once rescued by APA! Moby was given Capstar to kill any remaining maggots. Capstar is a pill (cut into the tiniest of pieces for small babies) that will kill 90% of fleas and other parasites within 4 hours of administering. Moby was placed with a nursing mom named Bella, and this most certainly saved his life. This is our Mom Cat Program at it's best.

Look at him now! While Moby, in our records, should be about 6 weeks old, he is small for his age. His foster reports, "He tries very hard to keep up with the litter of kittens he was placed with that are his same age. He can get trampled on sometimes during play, but he just gets up and plays some more. He loves and craves the companionship of other kitties. He is sometimes anxious if he finds himself all alone."

It will be a few weeks until Moby is big enough to be neutered, but he is available for preadoption. Contact [email protected] for more information. 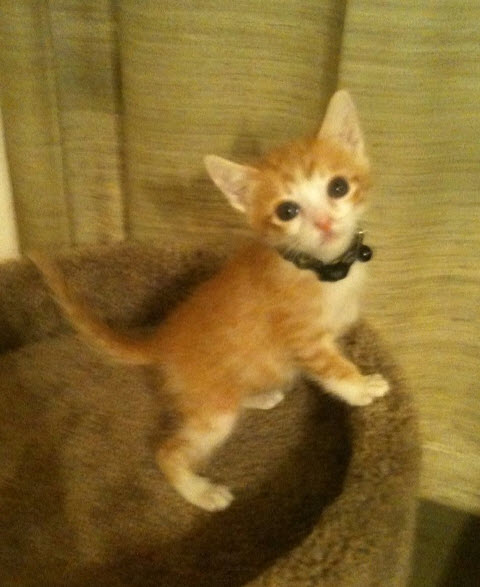 Kip and his siblings, Keifer and Kylie, were estimated to be three weeks old when found, and came to APA! just a few days before Moby on April 15th. Unlike his healthy siblings, Kip had a severe upper respiratory infection (URI). Cats should be vaccinated regularly with "FVRCP" which is targeted for all the viruses that cause URI in cats. Kittens cannot be vaccinated until around 6 weeks old, so Kip's low immunity, stress and age caused him to get infected. Kip had a stuffy nose, watery eyes, and was so congested that he was unable to nurse on the bottle because it would mean he couldn't breathe. Almost immediately, however, the Nursery volunteers noted that Kip was active and alert and so desperately wanted to live. So, our medical team began tube feeding Kip to ensure he was receiving the appropriate amount of nutrients every day. Kip also began a back-to-back regimen of FIVE different antibiotics to help with any ancillary infections.

Eventually, the virus(es) ran their course, and Kip was able to nurse. Because of the delay, Kip nursed the bottle much longer than his siblings, and took much longer to wean to kitten food. There is really no possibility that Kip would have survived without intervention, and his foster mom is really happy he made it. She says, "Kip is my little soldier. He fought so hard at every critical moment, and he is extremely people-oriented because of all the hands-on attention he got. Kip wears a cammo collar because of his fighting spirit." Kip has already been adopted, but he is still so much smaller than he should be. His littermates are gone to their own homes now, so Kip gets lots of extra love and attention in foster care.

Wynnie came in with three littermates at just 4 days old on April 24th covered in puncture wounds from head to toe after being attacked by another animal. Worse, parasites had taken over their puncture wounds, burrowing in and making things problematic. Like Moby, this litter was treated with Capstar to kill existing parasites, and the wounds were cleaned. Kittens just days old are extremely delicate so keeping them warm after "wound bathing" is important. Within three days of arriving at APA! three of the kittens had succumbed to their injuries, and only Wynnie survived. She went to an experienced bottle baby foster and has slowly, but surely, been growing and thriving. Wynnie loves the company of other kittens and cats and even seems unphased by dogs, given her small size. She has the most silky spotted tabby coat - while most kittens' coats are very "cottony" in texture, Wynnie is amazingly soft.

She shares her foster home with some slightly older kittens but as her foster mom describes, "She is adorable, playful and snuggly, and regularly romps with her older foster brothers and sisters." Apparently, little Wynnie doesn't realize how much of a miracle she really is. Wynnie is now 5 weeks old, so isn't quite yet ready for preadoption, but keep an eye out! 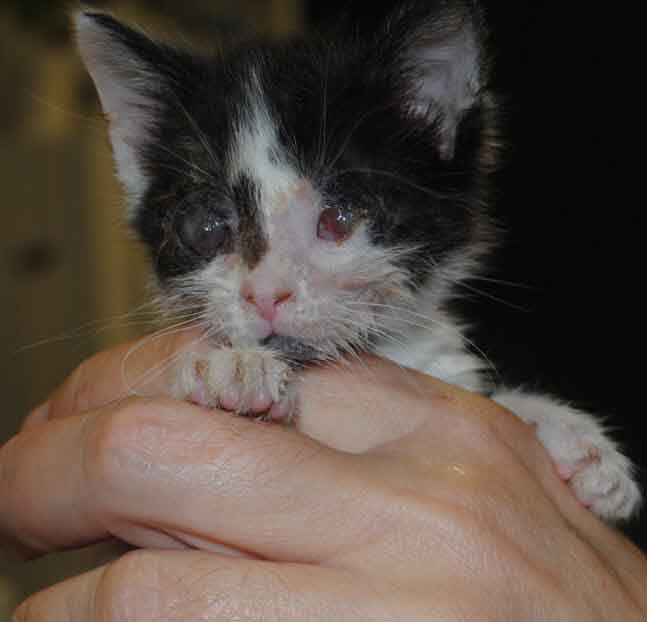 You will hear a lot more about India from us in the coming weeks, but she is a notable "Miracle Baby" because she was taken to the shelter on May 8th with her littermates after being exposed to a horrible, yet common, virus that has left her completely blind. India and her siblings were "owner surrender - offspring from pet" which means that she had access to her momma but was taken away too early. While this makes us sad because the kittens were barely two weeks old, we immediately stepped in to help this litter and India, especially. At first, India's eyes were quite alarming, but with regular doses of two separate eye medications, she has already improved and is no longer in any pain.

While she may not see her surroundings, she knows that caring hands are providing her sustenance and love, which has made India accustomed to people. She is a happy kitten, and with a full belly she will lay in her warmed bed on her back and play quietly with her feet...we call her our "Happy Baby."

India is just 5 weeks old, and will be ready for adoption soon. Suffice it to say, careful screening will ensure the most accommodating forever home is found for this special needs girl.

Nearly 500 kittens have come through the Nursery this year so far, all equally worthy of a published story all their own, like Traveler, who was so dehydrated that she was on an IV at both the shelter and at the APA! Nursery, and then received a blood transfusion. Or Esmerelda, who was covered with ringworm (a skin fungus that causes hair to fall out) so severely that she looked like a hairless Sphynx.

The kittens featured here are just examples of the amazing things that can be accomplished by a focused team of volunteers and medical staff. Please consider making a monetary donation so that the Nursery can purchase supplies such as medical gloves to apply eye medication to India, or syringes to flush the wounds on Moby and Wynnie, or formula to tube-feed kittens like Kip. All of these kittens are worthy of a chance, and we can't give that to them without donations.